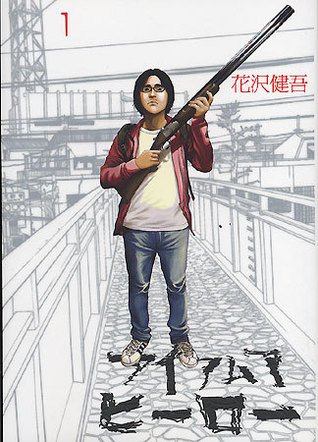 I am not entirely sure what to think of this manga. Why did I read it I hear you say? Well, not too long ago I saw the trailer for the Live Action movie of this one, and I was interested, it seemed really awesome.

Sadly, the manga just plainly sucks. At least the first volume. I am not sure what to think of the main character, he has delusions, and talks to them (which to me says that he should seek help), he has a girlfriend, though at one point I was confused, it looked like he was cheating, unless that was someone else, but dear lord confusion much? He acts quite weird throughout the day, thinks about sex quite often, even when his girlfriend says no. But he is also dedicated and tries to work hard to get to his dream, being a mangaka and having his own successful manga. Of course, that dream is still far far away. For now he seems to work strange hours as a mangaka assistant.

The manga is clearly 18+, there are several scenes that aren’t really for the young, and the last pages of this volume are definitely not for any kids. Dear Lord, that was a creepfest.

I did like that as the manga progresses you see that stuff goes from just a simple virus, to something much much worse. Through news reports (the characters watch the news/listen to the news), but also through characters we learn that something bigger is amiss in the world. People are bitten, people get hit by taxis yet just walk around without a care in the world. I loved how the author did this part, so that is what saves the manga from the 1 star I gave it originally. The sense of dread, the sense of something going bad very soon, I had goosebumps during those parts of the story, I just kept waiting for it all to go wrong, for it all to explode into something bad. And while it took 11 chapters, the horror does pop up.

The art is so-so. It is quite realistic, but at times it was just ugly and horror. The way the faces at times smiles, or talked or did stuff, it was highly disturbing. It is not my kind of art, I do like realistic, but it doesn’t need to look like horror.

Will I continue with this confusing, and at times with too much dialogue, manga? I am not sure. I am guessing I will do it, as I am curious on how our main character continues with his life, how he will survive. Luckily he has his gun with him, hope it has bullets.