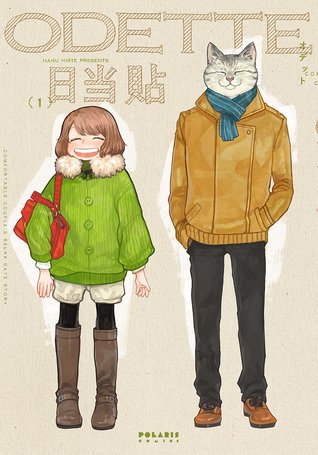 This was much more fun than I thought it would be. 😀

I was a bit hesitant about this book, a girl and her cat, cat? boyfriend? Or actually human with cat head + cat tendencies, as we have yet to see if he is fully cat or not. For now, given he has hands, normal legs and a normal body, I guess he is human with a cat’s head? How did that poor guy achieve that? And why is he the only one like this, and yet no one is looking weird at them? Is he really having a cat’s head? Or is it just the imagination of the girl? I hope that these, and many many more questions will be answered in the next volumes, as I am quite curious about this whole thing.

I do like the relationship between the cat(?) and the girl, it was really adorable, he really took great care of her. Giving her his coffee/tea that has cooled down (since she can’t handle hot drinks), him holding her when she is drunk and almost toppling over, and several other things. On the other hand, the girl also does her best to care for the guy. All though, she tends to be überclumsy and forget everything, but you can see that she really does care about the guy. She gets him the manga he likes, she pets him (which, I must admit is a bit weird), and she does several other things.

The manga consists of various things, dates, but also real life for both of them, what they do when they aren’t together. There isn’t much romance, so at times it did look a bit like they were just friends or brothers and sisters. But then we would see the girl go in full blush mode at something the guy did, and we are back to lovers. 🙂 Now I am not entirely sure if I would like to see romance/kissing/hugging/etc., it is still a bit awkward that one of them is a cat. Nothing wrong with loving a cat, but doing all the other stuff? That just goes in a no-no zone for me.

The art is gorgeous, soft and fluffy, which matches the feeling and style of the manga perfectly.

Would I recommend this manga? Yes, if you are in the need for something fluffy, cute and easy then this is the manga you are looking for.