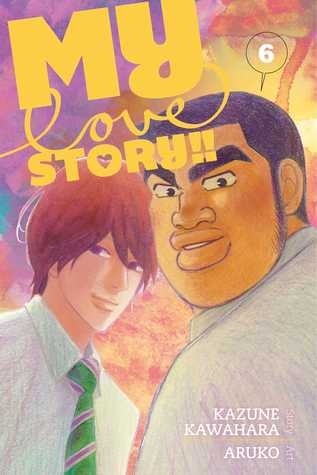 Yay, I finally have My Love Story Vol.6! Apparently I totally forgot to pre-order it, so I quickly corrected that and bought it, since I just adore this series!

The manga had nothing new for me, the anime already did a good job at adapting all these chapters. Still it was a great book, and it was so fantastic to see Takeo and Rinko back again. And to see that kiss again, because, yes, they finally kissed in the last volume. It was an awkward kiss, and I am not entirely happy with how it was drawn (it looked a bit smooshed/crushed). Though they can’t do much about the awkwardness of it all, since I guess with someone as big as Takeo you will keep getting it awkward, though I hope the next kiss will be less Takeo practically devouring Rinko. 😀

This manga also has the birth of Takeo’s sibling, and my oh my, I still like that part so much. The mom just working like normal, while all the men around her worry and panic. It was just hilarious to see. Takeo’s mom is a real tough cookie, even during labour she will give her wheelchair to another lady who was getting her first baby.
And then the birth part, where Takeo was confused as the father. 🙂
His little sibling, well, not that little, is adorable, and apparently just as strong as their sibling and parents. I just laughed out loud when they grabbed Suna and didn’t let go. This is one kid who will not let themselves be messed with or others for that matter. I can see it grow up like Takeo, though I hope it will have the sense that the parents have.
Ah, I also loved the reaction of Rinko to the baby. It was adorable but also hilarious.

Then we also have Valentine’s Day and White Day, two important days, and I had kind of hoped that the manga would have some romance on those days. Sure, it was cute, but I was just sad we don’t see any more awkward kisses. 🙁

The next volume seems to have the story of Suna’s stalker/girl who likes him. Something we already saw in the anime (they really did a fantastic job adapting this manga, it is not often that this happens). I will still wait eagerly for the volume though, as it was a great (but also sad) part of the manga.

All in all, this is one heck of a volume with a lot of important events happening. I would still recommend this series to everyone.