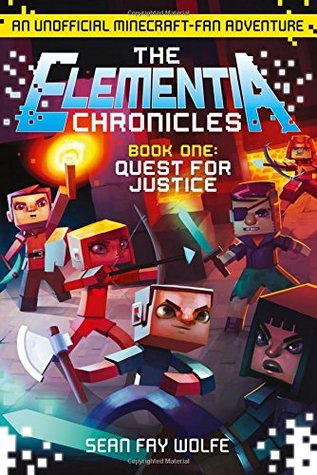 4.5 stars. I read this book in Dutch, but I will write the review in English.

I have never played Minecraft, though I am interested in the game (kind of). I was a bit wary of the book at first (I saw it in a book store), but after I saw it in the library I just wanted to try it out. I was a bit worried that it would turn out to be just a guide (like apparently most of the Minecraft books are), but no, this one turned out to be an epic adventure story through the world of Minecraft.

We have 3 characters, Kat, Charlie, Stan, though Stan is the real main character, and the one with the most time in the spotlight. I really liked Stan, he seemed the most real out of all the characters. The others also were quite real, but I don’t know, I feel that without Stan the story would have fallen apart. Kat was just a bit too so-so (too bossy, too demanding), Charlie wasn’t the best character, at least not until later in the book.

I also liked that Stan was special, that from the first page on you knew he would become something epic and great. And as the story progresses more and more characters start to notice this. That Stan isn’t just a player of the Minecraft world, no he is destined to become more.

The plot (overthrowing the king) was interesting, and I loved how it was written. Though at times it was a bit boring due to the overdose of details, like the battles which just seemed to go on and on and on. At times I just skimmed through those as I just wasn’t interested in seeing each character fight.

The world of Minecraft, even though I never played it, I could just imagine it, I could just see the blocky trees, the roads, the whole world, and I just had a big grin on my face all the time. I love it when authors are able to shape a world (even one that already exists) and make it come to life, make you want to stay there for a long time and discover this world.

There are also a whole lot of other characters who are just amazing, or annoying (like Mr. A).

Some stuff that were maybe supposed to be a mystery until later weren’t that hard to figure out.

The ending? It was great, and it set the stage for the next book (which I bought after I finished this one).

All in all, I can’t wait to continue reading this series, and I just hope that it will continue for a bit longer.
I would recommend this book to everyone. You don’t need to know about Minecraft, the book is written in a way that stuff gets explained, and you will just be emerged in a great world.