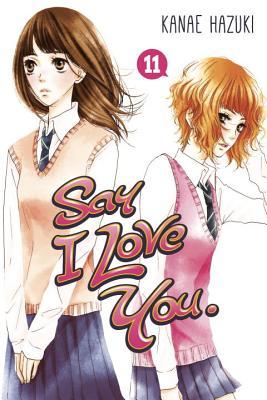 The eleventh volume of this manga, and while at times I am getting a bit bored, it was still interesting.

This volume has many things. We have a new school year starting (Senior year, so you can all guess what that will mean, yep, either the manga will stop soon, or it will continue into college), a new first class (with 2 interesting new characters), decisions to make for the future, dieting (because Mei (and actually all the girls in the manga)), serious talk, romance. The manga was full to the brim, and while like I said it was interesting, it was also a bit boring. It just misses the spark it had in the beginning. Things are starting to settle, and while there are some exciting things happening, it is all pretty much slice of life.

Also, like I said in previous books, while the whole thing of girls thinking they are overweight is realistic, it doesn’t feel realistic when the girls are twigs. 😐 And yes, I know that girls that are twiggy can also feel fat, but sorry, in the manga it just feels weird and out of place. Luckily, I am not the only one. Quite a few people are worried about Mei, especially Yamato, who is worried she will just fall over, or isn’t eating enough. He is happy with how she is, doesn’t mind it if she is a bit more fluffier. I am quite a bit worried about Mei at times. She does her best, she is amazing, but there is just no need to diet if you are already thin like that. 🙁

Mei’s problems don’t stop at dieting. She has to think about her future, senior year is here, but she has no idea what she wants to do. Everyone around her seems to have a general idea, but she? She just doesn’t know. But her friends, her teachers, her mother, everyone tries to help her. Also letting her know that it isn’t bad that she doesn’t know it yet. That at her age it is normal to feel confused.

I also felt for Meg. She is quite a great girl (if she wants), but we see that her life isn’t the easiest. While she is a doll (with how she looks, this is what she is called), she is tiny. And that might just interfere with her job. Poor girl. I do hope we will see how it will go for Meg. Will she give up on her job and go for Language arts? Or will she continue and just try?

I loved the romance between Yamato and Mei, there is more and more of it, which makes me happy. If only other manga coughMy Little Monstercough would do the same.

The new characters? I like them, they seem like nice characters, though I do hope that the guy doesn’t do anything to get between Mei and Yamato.

All in all, a pretty good volume, and I can’t wait until the next one.