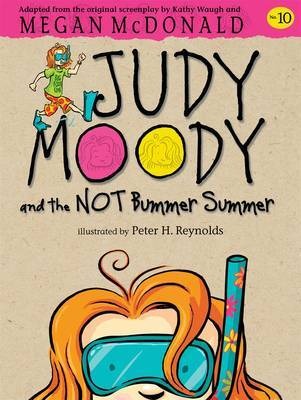 4.5 stars. And the last book that I have in my pile, now I need to buy the other 2 books, and hope that there will be more books coming!

I never heard, saw, or even heard a whisper about the movie. Just to make that clear. Before I found these books I never heard of Judy Moody in any way.

This book is all about Judy’s summer vacation. Her friends are leaving and she is stuck with her aunt Opal, who, as it turns out, is quite an awesome character. Opal really flew up the charts to be one of my favourites. She is fun, she is interesting, she dares to do stuff, though she really shouldn’t drive a car. 😀

The summer was also pretty fun, though Judy was at times Moody, and that annoyed me. But then again, I can also imagine that she just wants to have a great summer and everything is ruining it for her. Her parents leaving her, her friends leaving her, the dares not working out, and so so much more.

I didn’t particularly like Frank in this book. What a crybaby. 😐

I liked the hunt for Big Foot and the hunt for Mr. Todd. Around halfway in the book I had a suspicion where he might be. And it turns out I was right.

And wow, Stink is actually called James… Nice. I don’t think I have yet encountered his name like that, I was already wondering what his true name was, because I was sure hoping Stink wasn’t his real name. That would be so sad for the guy (even if he is annoying).

Of course we have the wonderful illustrations and I just laughed so hard at the things they showed. You read about them, but then you see them in the flesh and it just becomes even more hilarious. Poor Judy though.

All in all, this was a pretty great book and I really loved it.