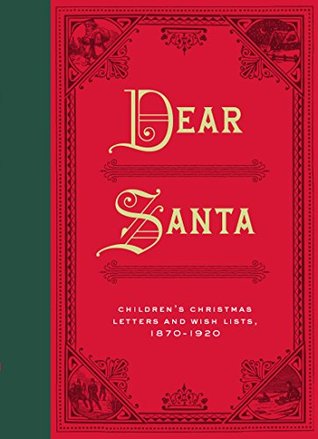 4.5 stars. I encountered this one while browsing Twitter around Christmas. It looked amazingly adorable and I just knew I had to have this one. I ordered it, and it arrived last week. 🙂

The book isn’t only letters though, yes, they make up most of the book, but there is also a little bit of history, explanations to what children wanted (because a lot of the terms are old and not used any more), trends in presents and some other titbits that I really enjoyed reading (even though it kind of spoiled some of the letters, yes, it really did that).

The letters themselves were really fun to read, and I laughed, the children back then were just as “bad” as the kids these days at times. Asking for tons of presents, a lot of stuff was pretty expensive back in that day. It seems kids will always ask for a mountain of presents no matter what age they live in.
There are also some kids who ask for stuff for friends, or for the poor people, I loved those. Kids who would even send with the letter some money, and even if it isn’t much these days, it was a lot in those days.
I liked that they kept the letters as they were. Spelling errors and all. At times it was a bit hard to read, but generally I could get the gist of some of the really bad letters.
It just gave that extra bit of authenticity. Since kids just spell things wrong, I would have been sceptic if they had fixed up everything.

There are also small illustrations (stamps?) which I liked, though after seeing some pass by for the x number of time I got a bit tired of them. I wonder why they didn’t vary some more? I am sure that with so much history behind Santa there must be more stamps or images you could use.

But I really liked the book, and I would highly recommend it to everyone.