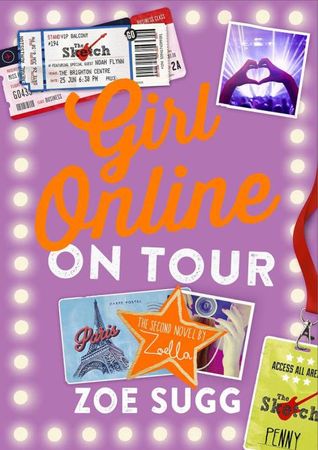 Phew, well, I am disappointed in this book. From a spectacular first book (4.5 stars), to this. The first half was pretty decent, but the real hit in badness came from the second part. The first part was around 4 stars (with the occasional dip to 3 stars), but the last part? I absolutely hated it. Well, OK, the ending was decent, but it still had some stuff I didn’t like. At all. Like the Noah thing.

Let me start with the first book. The book starts off a few months (at least it seems like that) after the events of the first book. Luckily the author let’s know what happened, how Penny and Noah’s relationship is going and what is about to unfold. And what is about to unfold? Well, Noah is about to go on a tour (with his band), and Penny is invited. The tour will go through Europe and will feature several great shows.
Noah was really sweet at the beginning, helping Penny (and she helped him), telling her she didn’t need to worry, telling her he would make time for her and they would be able to go touring through the cities they go to, telling her all kinds of cute promises. So, naturally, I was just enormously excited. Tours? Romance? Trips through cities? Um, yes, when do we start?

Of course clumsy Penny first loses her phone, which brings in a whole new story line with a stalker after them. I did love that addition, though until the end? I didn’t have a clue who got the phone, and who was blackmailing her. It sure was a surprise near the end to find out that person did it. I wouldn’t even think that person would have done that. Wow.

But then the tour starts (after some other bumps in the road). And from the start I hated Blake, best friend of Noah and also in the band. He was obnoxious, a pervert, drank tons of alcohol at any time of the day, was a dick, and oh my I could go on for days about this guy. I will also talk some more about him in a later part since he does something that is just unforgivable.

The tour is really fun, and I loved that we could see how it went backstage, how Penny tried to befriend the crew, the band, the people helping with the concerts. She really tried her best and even with a few (almost) panic attacks, she did amazing.

She also writes her blog, though it is offline, because of the events that happened in the first book. But she still writes, and some people can still read it. She can still vent, and have her blog, but without the added stress of people posting nasty stuff. Of course people want Girl Online to be back, but luckily they are just kind about it.

But soon in the tour I started to notice that something was changing about Noah. Instead of the sweet, kind guy that he was in the previous book, he was changing into something I didn’t like. I hated Noah.

And that hate only grew later when

Then we have Elliot, who I didn’t always like in this book (no surprise there), but I did like him and Alex together. They were adorable, and I was so happy for Elliot.
I also did like Elliot and what he did for Penny when stuff didn’t go right. He can be a good friend. 🙂

Leah was the biggest surprise in this book. At first I didn’t like her, but I soon saw that the bitchy mode was just one of her parts, and that she was actually quite nice and friendly. The thing she did in the end? I was just applauding, that was such a sweet thing to do.

The ending. sighsI liked it because of Alex and Elliot (no spoilers though), but I hated it what it meant for Penny and Noah (again no spoilers). I could easily talk about what I didn’t like in spoiler tags, or what I liked. But I don’t want my whole review to be one big spoiler tag.

Would I recommend this one? No. Even though it had quite a few great parts, there were a lot of parts that left a bad taste in my mouth. Will I read further books (because there are still a lot of unanswered questions (like who Pegasusgirl is))? I am not sure yet. Maybe, maybe not.