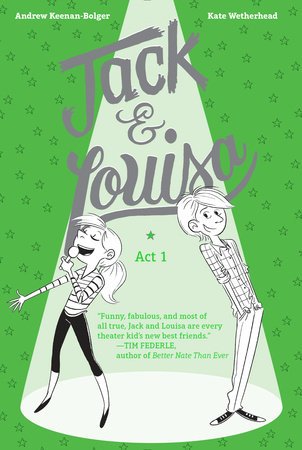 I saw this one on Twitter, and after checking the blurb and all that other information I decided I would just buy this one. And boy, I am so glad I did, because this book was terrific. The pages just flew by as I read.

We have 2 characters both nuts about the theatre, Jack and Louisa. Jack having had to move from NY and away from his Broadway things (though we later find out that he didn’t mind that part too much due to reasons). He is not amused that he has to move, and especially not to some crummy little village/part of the country. He wants to stick to NY with all its awesomeness.
Then we have Louisa, a big theatre nut who loves (duh) everything about the theatre, her current obsession is Into the Woods (which drives her parents nuts). 😀 She is a bit insensitive at times, a bit nosy, but all in all, she was a good kid.

Now I have nothing with theatre. I live on the other side of the ocean, so Broadway or NY are a no-no. Theatre is quite expensive (at least if you want a bit of a decent place to see stuff) + my country apparently loves to DUB everything in DUTCH. Yeah, not one of my favourites. If they kept shows original, I would love to see it, but now? Nope, nope and nope.
We also didn’t really have the school clubs the US/British people tend to have. So yeah, no theatre club or anything here. You had a few sports club (also not a lot), a newspaper, maybe even a band, but I believe that was it.
So yeah, no way for me to start being interested in theatre.
Still I enjoy reading books about theatre, it is fascinating that people apparently dedicate their whole self to such an event. At times I find it a bit too much. To even act and dress up outside of the club or event.
Still no need to bully people, or call them gay just because they are guys + have done theatre. That is just a no no. (And yes, this happens in the book, followed by an epic showdown of people not approving.)

The book switches between Jack and Louisa, and we find out more and more about them and their lives. About their passions, about their feelings. Louisa was a bit blunt, and also a stalker, and I didn’t always like her because of that. I just wished she would get the hint and leave the poor guy alone.
So Jack was truly my favourite character in this book. Sure, he was a bit mopy, but as the story continues you find out why, and you just want to pat him on the shoulder and tell him everything will be OK.

The whole Into the Woods (auditions, the rehearsals, the actual play), I really enjoyed reading about those. I loved how the cast became one big family and how much fun they had.

The ending? And all that happened there? It was interesting and I was curious to see what would happen. I am happy with the outcome. It made me smile.

However, now the wait starts… Wait? Well, this is one of those books that take a year or so to get a paperback. 😐 Which means that since the hardcover for book 2 just came out…. I will have to wait until next year before there is a paperback. ARGHHHH. Just bring those paperbacks out directly. There are so many books I want to have, but only come out in hardcover. Yeah, only if I am really dedicated will I buy a hardcover (too expensive).

Phew, I think I mentioned everything I wanted. I would really recommend this book, though maybe you should wait and just buy both the paperbacks (when book 2 comes out in that).