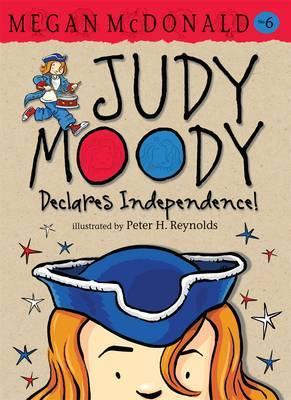 This book was all about Independence, not only for the US (which was interesting, I did know a lot of stuff, but I learned some new things), but also for Judy. The book starts totally different than the other books. Instead of Judy hurrying to class, or starting with school, the book starts off with our Moody family in Boston, learning all about the American Independence, about tea parties, about fights with British people, about taxes. It was a refreshing start.

Sadly it wasn’t all that good. Don’t get me wrong, most of the whole Boston thing was highly interesting, but, big BUT, Stink was just so effing annoying. Constantly whining and complaining and moping about everything, not being happy that they were able to get out of school and have a fun day as a family far away from home. Oh no, mister Stink just kept bugging and complaining. Normally he is already quite the annoying little insert some bad words but he was even worse in this part, and well, actually the rest of the book as well.

Like I said the book is not only about American Independence, but also about Judy and her independence. She is older than her brother, but still is treated the same (and I can kind of understand why). I can imagine that is just not fun. I do understand the parents and why they don’t give her more pocket money or time before bed, but I do kind of wish they had. Judy does do her best, at school and at home, and sure she needs to be motivated at times, but I don’t see why that is so strange. She is still a kid. But I do think that she should be rewarded for the stuff she does do. And why doesn’t she have her own alarmclock? And why is that so strange that she wants one?

I loved Judy’s project at school, and how she performed it. Judy is creative and likes to show that.

Of course she still has her moods, but that makes her an interesting character. Sure, at times her angry moods get a bit frustrating, especially if they happen because she doesn’t get what she wants, but in general the moods fits the situation, and Judy generally changes moods to something better quite fast.

We also have a new character, named Tori, who makes the cast even bigger. She is from England and Judy met her during her Boston trip. They write to each other (and sent little things). It was really cute, and I do hope that Tori, or Judy, will visit each other. That would be so much fun.

All in all, this was a great book, if only Stink wasn’t so annoying I would have rated the book higher.