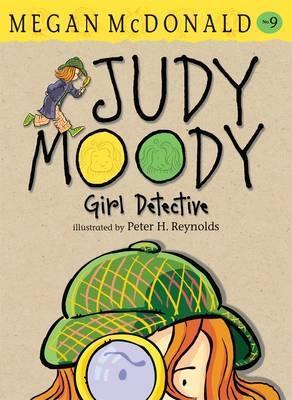 This was a good, no, Drew-tastic book!

Because, yes, there is a lot of Nancy Drew talk in this one, and I, as a big fan (though I still have so many of the books to read) was just adoring every moment of it. So happy that Nancy Drew is still a big part of today’s children, and thankfully the kids in this book read the original series, and not the series about Nancy Drew they are making these days.

There are several cases in this book, though most are really short, and most of the time not really cases. Glasses that go missing, Candy that goes missing, several other things, but the biggest thing? And the thus the focus of the book? The missing of a police puppy named Mr. Chips. A really cute, fluffy little mystery it turned out to be.
Of course Judy (and her friends) are on the case and they do anything to figure out what happened to the little puppy. At times overreacting or finding out stuff that has nothing to do with the case. 🙂

I wish Judy good luck on her mission to read all the original Nancy Drew novels, depending on how fast she reads, she will have several weeks of reading ahead of her.

The only thing that I didn’t like, and the thing I reduced most points of, was the whole Judy stealing for her brother thing. She doesn’t want her brother in her room, gets angry when he steals/takes stuff without asking. HOWEVER, she is the biggest hypocrite in this case. Why? Because she herself steals money out of her brother’s piggybank, steals his pins, and oh so much more. And I am so sorry, but I just hated that so much. And I do wonder why the parents don’t do anything about it. If these were my kids, and I would find out one of them stole money from the other? Or just takes stuff for their own? I wouldn’t be amused at all.
Again, I also don’t approve of Stink, but I think it is quite hypocritical that Judy acts all high and mighty about stuff and then steals stuff herself. 😐

I still love the illustrations, the artist really knows how the capture the story right and make it come to life. 🙂 (And yes, I keep mentioning it, because it just deserves to be mentioned all the time.)