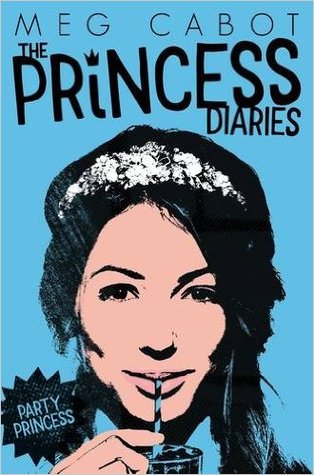 Mia is back again! This time she in for a party!

I really don’t like the wait between these books! Now I have to wait until the end of March again to read the next 2 books in this series! Arghhh!

Because, yes, I am enjoying this, maybe because I am slowly starting to just not see some stuff in the book. The feminism, or vegetarian life style which is promoted as being so awesome (and Oh WOOEE is us if you dare to be a meat-eater). Don’t get me wrong. Feminism is good (well some parts, like women having the same rights as men, work open for both male/female + same pay for both, girls going to school), vegetarian is totally cool, but (big BUT) I don’t need it to be pushed in my face constantly. Which is what some books do, and it is just frustrating. Getting stuff pushed in my face doesn’t make me go for a certain something, if anything, it will make me go running. 😐
So yeah, I am slowly just starting to turn my brain off during some parts.

Mia was pretty good in this book, though her insecurities and the way she acts, don’t really match with a 15/16 year old. At least not for me.
At times I still feel Mia is like 12 years old, instead of her almost 16. At times we see her mature side, and thankfully she does have a good mature side, but often we see her running around as a headless chicken. Which is a shame. I would love to see Mia’s mature side more. I just couldn’t see what Michael sees in her. Sorry. She can be quite lovely, but what the hell was she thinking during that party? What was she wearing? And why is she so easily swayed to believe one person’s things? Why did she immediately go ahead and think that Michael hates her. Sure, he ignored her, and that mustn’t have helped. But come on girl, the world doesn’t revolve around you.
Also could you just stop acting like the mom around your brother? It is creepy and not healthy.

Now the review sounds pretty negative, and I did give it a 4 star. That is because even with all that, I still enjoyed the story, the romantic moments (we need more of those), the side-characters (with the exception of Lilly, because dear Lord, if there is one character I would like to obliterate from the planet it is her), the Musical, the whole we don’t have money and we can’t let anyone know about this, the name of the zine, J.P (I know he counts as a side character, but he deserves some love, since he was totally great and I hope he will pop up in the later books even more), Mia when she acted mature and when she finally saw the world didn’t revolve around her, the presidency, the party (not Michael’s party), the cover is also really cool. And there are probably quite a few other things that I really enjoyed about this book. I had quite a few moments were I was just laughing my butt off, and times were I was cheering for Mia, because she could use some motivation.

I also liked that we heard more about Lilly’s and Michael’s parents. Even if it was sad news. It brought something extra in the book, and will probably mean something new between Michael and Mia.

I am still loving the covers + the colours used, I really can’t wait to see how they will look when I have all of the books!