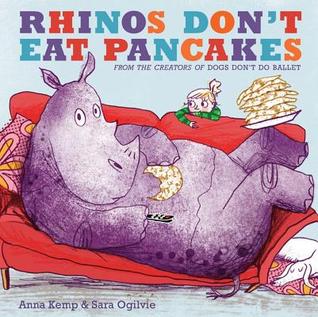 I just laughed aloud when I saw this book at the library. That title! That cover!

And then it turned out to also be a really funny book. Though it was also sad at times, that had to do with how the parents acted around the child. I don’t understand why people would make a child and then just bluntly ignore it and anything it says, dismissing everything. Bah. And then at the end act like that. Bah bah bah.
Sorry, I really had to get that out of my system. shakes head at bleh parenting

Now to the fun parts of the book. I just laughed so hard when I saw that rhino pop up in the kitchen and nom on pancakes. Who can blame him though, pancakes are delicious! The girl thought she was going crazy, because you don’t see a purple (yes, purple!) rhino every day, especially one that just eats your pancakes.
The girl and the rhino quickly became friends and I was just awwing at all the things they did together, and how much fun they had. It was adorable, and I was really happy for the little girl. She deserved a friend, someone who would listen to her and be there for her.

The ending? I was really sad, though I also had to laugh so hard at that last page. I would love to see a follow-up book, I am sure there is a story there. Though maybe the way it is now is more effective.

The art? I loved it! The rhino, the characters, the backgrounds, they were all lovely drawn. And oh so colourful!

Would I recommend this one? Yes! Cry, laugh, giggle, protect your pancakes! 😀