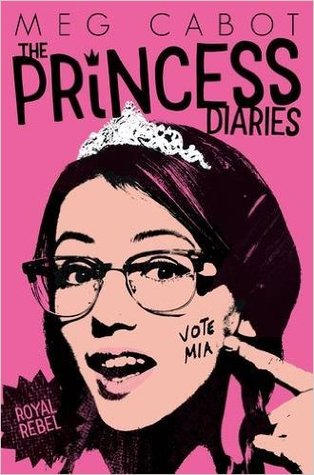 This was a pretty great book in a (so far) shaping to be epic series.

Let me first start with the good things:

Mia is still awkward, but she does her best to fulfil her princess role, and you can see that she is getting better and better at it with each book. From a girl who didn’t want to be a princess, who refused to do princess stuff, she is now making decisions, helping out her people, and taking on her princess role. Of course, not always happily, but then again, I can understand that, you have a great boyfriend, and then you are whisked away to your country again in the middle of summer break. I can just imagine that it must suck, you want a summer full of love, and instead you only get a bit of that and then you have to leave. Luckily we live in an era with phones and internet (hopefully Genovia does have that now).

I also loved Mia’s attitude in the later parts of the books, especially with the whole president of school part. I just wanted to clap for her and encourage her to keep on going, that she could do this. The conclusion to the whole president chapter was great, though I do hope we don’t get a mega explosion between characters because of it. Then again, it is that character, so I guess we will be getting Michael Bay kind of explosions.

I was also applauding for Meg Cabot not shying away from the sex topic. Oh no, don’t worry, it is all still very clean, nothing happens. But I am so happy to see that a book finally discusses this topic in the way this book did. It is not often, well, OK, I barely seen it, that a book writes about this topic so realistically. Generally characters just hop in the bed with characters without the Talk about if they both want it, if they both are ready for it, and if not, when they will be ready. Throughout the book we have Mia being totally stressed out, because she hears stuff (typical Mia, hears stuff and stresses out without checking facts). Though for once I could mostly sympathize with her (not all the way, because she made such a huge drama out of it). The talk and what comes out of that, it was great! I hope the other books will also still talk about this topic, and that we will see Mia’s and Michael’s relationship grow.

Ah, yes, another good thing. Mia FINALLY didn’t let people run over her all the time. Still for a big part she did, but she finally put her foot down with a lot of Lilly stuff, and I was just so delighted to see her finally stand up for herself and what she wants.

Now for the parts that weren’t really fun. Mia’s obsession with her baby brother. Dear Lord, girl are you the mother? I got SO sick of her meddling, acting like her mom is totally incompetent, and sure, the mom doesn’t always do things right, but she raised you, and you turned out right, so I think you don’t need to stalk your mom every x amount of time, or make her feel like she is a crap parent. I really wanted to just throw Mia out of window at times. Seriously, I do hope that the next book won’t have this obsession. Bah. Sisterly love is one thing, but this is just crazy.

Lilly, once again I hated Lilly. Then again, with each passing book the hate grows. Lilly is the most annoying character (even more annoying than the grandmother) ever. Instead of getting better with each book she gets worse. Pushing people to do whatever she wants, calling her friend a name she doesn’t like and just don’t see that it might hurt her, acting a bitch when your friend is calling with her boyfriend, acting a bitch when people don’t instantly do your bidding. Then there is her fanatical ways. I don’t mind a character protesting against things, but Lilly? Lilly is taking it too far. She is the kind of person I would really avoid in real life.

The English teacher. You see, that kind of teacher is a person who will ruin people’s talent and also the love for books or language. She is the kind of person I don’t like, people who push their likes and loves to someone, act like classics or high literature are so much better and then make bad remarks when someone says they prefer other stuff. Let people read and write whatever they want.
I am not saying that what Mia writes is always perfect, but to just cut of points because Mia uses pop-culture/modern references in her works? What the hell?

What else? I think I have covered most of the topics that I wanted to discuss. I am quite excited to read the next book (hopefully it will be here soon).
Would I recommend this book? Yes, yes I would! Even with some bumps, it was still a great and funny read.