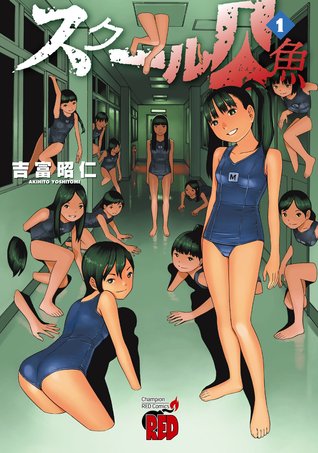 Mermaid, Mermaid. Could you please, make my love come true. Give for me your flesh and blood.


This is a review for Volume 1 and Volume 2, which is the complete series, unless the mangaka decides to continue it one day (hopefully).

I just love Japanese urban legends + the way Japanese write horror is often just wow. I am a huge fan of Japanese horror movies. Especially the ones with urban legends, or with psychological turns and twists. Things like Ringu (all of them), Ju-on, The Eye and so many others. These days I watch less of it, mostly because the TV channel that showed these movies stopped doing so years ago. I still try to watch the movies, but it is quite hard to find them.

This manga is a lot of psychological, with urban legends (the mermaids), with a bit of gore, with a lot of creepyness, with even more twists and turns than a twisty road would have. Seriously, I just kept going Whoa, or I didn’t see that one coming!
Of course I also thought the girls were a bit selfish, and quite brutal. That they, for love and getting that boy, would trick people, would eat mermaid flesh, would kill. It is just, wow, and I can’t imagine that anyone would go that far, but apparently, lots and lots of girls are doing it. And it really works.

So how do girls know what to do? How to hunt? What to hunt? Well, there is this notebook, been there for a long long time, passing on from girl to girl, from friend to friend. Sometimes with good, but often with bad intent. The book is filled with what to do, be careful of this and that, what to chant.
Every time a girl discovers something new she adds to the book, adding new information, drawings, and much much more. I really liked the notebook, but also the twists and turns that each time was discovered with each couple.

My initial thought was that these girls were mermaids, but in fact, as the cover also shows, these are girls in Japanese school bathing suits. They look human, they have legs and arms and everything else, but they can’t talk, and they can also transform into something more horrific than their outward appearance (which really creeped me out). I kind of like the idea that instead of them having tails, having a mermaidy look, they look just like the girls. Which must make it all the more difficult to kill them.

We have different couples, varying between 1 and 3 chapters per 2 characters. Of course there are also parts were we meet older characters, though not all of those parts are good (in the way that you will be squealing because you will recognize a character and feel sorry for them).

My favourite pairing would be Kaori and Mariko. I loved them both and I was quite happy with how it ended for them.

The last 2 chapters will explain how the notebook was created, what kind of person was behind it, though it doesn’t exactly explain how she knew of certain things, and that makes me wonder. There are still quite a few questions I have left, and I guess I will never get an answer to them.

The art is pretty good, at times really pretty, but also really sad. At times it is highly creepy. I thought I recognized the art, and then later I found out that I read several other manga by this mangaka. 🙂

All in all, this is one manga series I would highly recommend. If you are looking for a manga with a lot of twists and turns, a manga about love and what girls will do for that, if you don’t mind the mermaids to be young girls in bathing suits. Then try this one out.