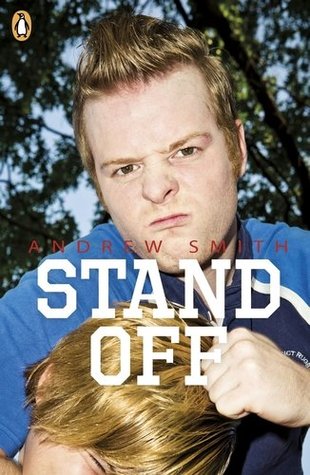 Be warned, I won’t be kind to characters, I might curse.

Phew, well after 2 tries I finally got through this book. But boy was I disappointed it took me so long to get through it in the end. I was really looking forward to this book, even re-reading the first book so I could get into reading this one. Only then to find out that this book was meh.
Of course, now I got through it, and I am glad I did, because in the end it was a pretty decent book which deals with some serious topics, like getting over the death of your friend, panic attacks, coming out of the closet, sex, and much more.

Now I hear you say, what wasn’t good about the book?
Well the biggest, and the one which caused me to drop this book the first time, and which causes the book to lose at least a star, is Sam. Snack-Pack. The Abernathy.
As I also stated in a status update on Goodreads, I wish he would get trampled by an implausibility of gnus. Or get locked into a coffin and buried.
Because he was that annoying, and I feel that if he was just erased from the story, or maybe even had a better personality that I would have liked the book more. Now he just ruined everything with his whiny, immature, bratty, pathetic, sad, did I mention whiny?, get a clue, get your nose out of other people’s things and so much more other words.
I just didn’t get why they put him and Ryan Dean together. Sure, it was explained in the beginning why they put him together, but I find that a bullshit excuse.
You have a kid, 12 year old, who is claustrophobic, and put him in a tiny deathcell of a room. Then you add a 15 year old who is traumatized because of events that happened in the previous book, who has panic attacks, and fucking deserves a break for once. But oh no. He has to get a neurotic little piece of poo that keeps whining. 😐 Who keeps stalking him. I thought we would be safe from him during some events, but OH NO he had to just CONVENIENTLY be there, or suddenly decide to do the same thing as Ryan Dean. Urgh.
I really could go on for days ranting about that piece of conveniently added crap that is Snack-Pack. I don’t give a damn that he got slightly better at the end, you know, I am sure that by the end I was just able to ignore him and his idiotic crap. 😐

Now let’s go on to the rest of the book.

Ryan Dean, ah, Ryan Dean. Even under everything that happened with him in the previous book he is pretty much the same character. Rude at times (though he is still not cursing a lot, but he does do it a bit more than normally), thinks about sex 90% of the time, loves rugby, loves his girl, still calls several other girls/woman hot, and I could go on. Even with all this, he is a pretty likeable character and I was happy to see him back in this book.
Of course I also felt really sorry for him. What he went through in the previous book really broke him apart. He has nightmares, he sees things that are not there at times, he barely eats, he loses weight because of that, he has panic attacks, and his life just isn’t the easiest. At times I just wanted to give him a pat on the back, tell him things would be fine after a while, that the feeling you have now will fade, it will never leave, but things might get easier.

Seeing him at rugby was also great, but this time there were also some stuff that wasn’t just happiness and joy. The coach is asking him to be the new captain and stand-off. The position of his best friend Joey. 😐 You can imagine what kind of reaction this causes in Ryan Dean. On the one hand he is happy, but on the other hand he is worried, and wonders if he should do it or not. I like that this was added, and that Ryan Dean didn’t just accept things and then walked away.

I also liked Ryan Dean and how he handled out of the closet coming guys. One suddenly develops an interest in him, and unlike some guys that I have seen in books (and also in this book), he doesn’t just run away, or start discriminating his friend, but instead he talks to them, and makes it clear in a nice, and a bit funny way (to lighten the mood, and also to show he doesn’t hate his friend), that he isn’t interested and that he would love to just be friends. That nothing will happen between them, but that he is just happy for them.
And that is also how it goes when one of closer friends comes out of the closet. Ryan Dean is kind and friendly, and sure, he is a bit weirded out (but then again, wouldn’t anyone when you walk into your friends room and see him and the other friend together… with only underwear on, clearly in the midst of something?), but he handles it kindly and friendly. Wishes them luck and happiness. And I love that about Ryan Dean. Not many guys of his age would probably handle it with the tact and friendliness that he did. Good job Ryan Dean!

The romance/relationship between Ryan Dean and Annie was really cute, and I was happy for them both. They really went a bit further in their relationship, but I didn’t mind it. I felt that it fitted them, they are that kind of couple, and they have been together for a bit of time (+ they have been friends for some time).

The illustrations/sketches/other things that were added in the book were great and gave the story some more life and made it more interesting. I wish we had some more art though, it felt a bit less than the previous book.

Then we have a new character. Joey’s brother Nico. I loved that the author put him in the book. I won’t spoil anything, but he really added to the story, and his pain and his story were great and interesting.

There were several moments that made me laugh aloud, stuff that lightened the mood of the book. Since at times it did get a bit gloomy/sad (which is not bad, but some lightheartedness is nice).
The only thing I didn’t like (other than the Abernathy) was the rushed ending. One moment Ryan Dean was still having trouble, the next everything is done and over with. I get that there was a moment, and several events happening, but I found it a bit too convenient and easily done. After all the book and everything that happened to Ryan Dean it seemed like the author just didn’t care to solve it properly. A shame. 🙁

I saw that there will be a third book, and even an extra series? I am not sure if I will read it, it will depend on who the characters are (if it is the Abernathy, or has the Abernathy in it, then NO). But I am interested.

Phew. I think I wrote all I wanted to write about this book.
Would I recommend this one? Yes and no. With the Abernathy and the rushed ending I am not entirely sure, but with the other parts I would say yes.