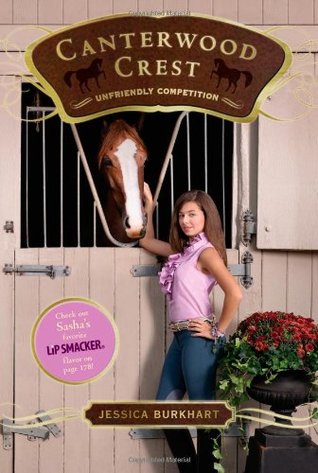 No!! The last book. Well OK, I still got one of those extra books, but there will be no more Canterwood Crest after this one. 🙁 No more Sasha, no more Jacob, no more Lauren! I will really miss everyone. I will miss the drama, the silly discussions, the romance, the horses, well everything!

This last book gives us a bit more drama with a mysterious blogger, 4 people about to get expelled if one of them doesn’t fess up, a big horse event coming up, and oh so much more. The Sasha books really end with a bang! And I loved the ending and how it sew together the Lauren and Sasha books into one series. We saw that scene from Lauren’s perspective, but now also from Sasha’s and I just was so happy to see it happen. Just like there were some events that happened that also happened in the Lauren books (Mr. Connor getting hurt for instance).

The whole blogger thing? I just had 2 suspects, one was a definite: It must be this person! and the other was more: Mmm, it could also be this person. Julia and Brit. I won’t spoil if it was any of those girls, but I will say that both of these girls had something, something that made me doubt them. Julia because of her whole attitude in the last few books, her reaction to stuff. Brit because I was just waiting for that hidden secret, you never know after all. Maybe she isn’t such a good person after all.
I was really dying to know who did it though, I even considered reading on at night, but decided against it because I was dead tired after a stressful week. I also considered just peeking at the end, but decided that wouldn’t do. 😀
Of course, the whodunnit wasn’t told until the last few chapters. Arghhh!

Then there is triple romance, well maybe more, but the focus was on those 6 people. Brit/Andy, Troy/Heather and of course our one couple: Jacob/Sasha!
I was delighted with all the romance and all the cuteness that happened.
Though again, like I said in most of the reviews for this series, I don’t believe one little bit that these characters are 12/13 (or even younger). Sorry, no. Really, no. The way they talked about each other, the way they missed each other. All kinds of smooshy lines that I see much more in 16+ aged characters than those that are still so young. Maybe I miss something, but I do remember when I was 12 that I had almost no interest in boys, and the same was the truth for many girls in my class. Sure, boys were interesting, but a true love interest? Undying love? Kissing the way these characters do? Boys making up all kinds of romantic dates? Um. Nope. That wasn’t happening. So yeah. I will stick to what I think and what I kept in mind: These characters are 15 to 17 years old.
Or maybe I am just old-fashioned + everyone around me was weird back in that time and acting like this is totally normal if you are 11/12/13.

Not to mention all the other stuff. They were really mature, really adult-ish. The way they did various stuff. Their homework? Other stuff? Nope. Not even to mention the whole make-up tutorials we got as the girls went to a party. The way they put make-up on? Like a professional? I don’t believe one bit that ALL the girls there can just wear make-up at that age, and even know how to apply it so professionally.

But all in all, it was a good book + series, and I truly enjoyed it to bits. It was a great boarding school series, and one I would recommend to everyone. Even characters that I didn’t like (Heather, Alison, Julia) became characters (well with the exception of Julia) that I loved. That doesn’t happen often, but Heather really showed another side. We learned more about her background and found out why she is like this. It is amazing, and I will dearly miss all the characters.

So I guess this is it. Well, I still got a special/bonus book, so I will probably write a review for that, but as for the main series? I am guessing it is over now. 🙁 Thanks Jessica Burkhart for writing such an engaging series.