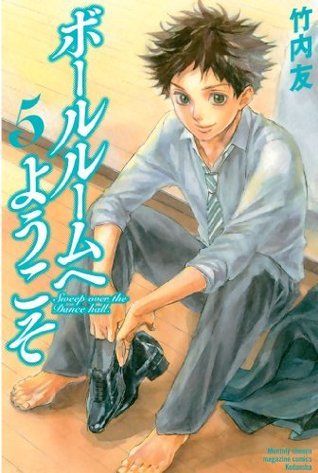 The manga continues, and we see some movement happening in the time.

For the first 4 volumes, and a small part of the 5th volume, Fujita has been in Middle School, but not any more. He graduated, and is now going to a high school, were he meets a new character who I have no doubt, will play a big role in Fujita’s life, not only in school, but also in dancing.
I loved to see Fujita graduate from Middle School, it was about time, don’t get me wrong, but I felt there was a need to finally move time forward. The only way we could truly tell the time was with the contests that pop up every so often in the manga, and sure we saw Fujita grow. He wasn’t slacking that much, he worked hard, his posture changed, but in this one we see him also grow older. He is now in the final part of school, because I don’t know if he will continue after High School. That is just a feeling I have. I think that if Fujita wants, that he might pick to go for dancing professionally, or go to a dance school in the end. I will be looking forward to that time, there is still a long way for Fujita to go, so we will have some time before we will know what his future will hold.

As I said, we have a new character, and I have to say I didn’t like her that much. At times I saw a totally different girl underneath the bitchy surface, but I am just not convinced of her reasons to act the way she did, and if she is waiting for Fujita because she likes him, or if she does it for that famous dancer.
It will be interesting to see how it will continue, though I do hope that she will lose her bitchy behaviour and starts to be honest and kind.

There are several contests in this manga, and I enjoyed seeing them happen. I think an anime for this one would be perfect, now I can imagine the movements in my mind, but I would love to see them on screen. Not sure how it would look, if they adopt the style of the manga (sharp/weird angles, mangled bodies) it might be more of a horror show than a drama/slice of life/dance show.

There were several hilarious situations which caused me to laugh hard and shake my head at the silliness.

I was also glad to see that brother/sister combination in dancing come back. Yay! They look fabulous together, I am so happy for both of them.

Yes, again, as I have said multiple times, at times the art is lovely, but when they start dancing the art transforms into something that I am not liking. The characters look monstrous, scary, and as if someone threw them in a blender and put it on the highest level.
It is a shame. I get that dancing is probably not the easiest to capture, but I am sure that you can capture it more gracefully than this.

I will be reading volume 6 soon, as I am curious about the dancing + the new girl.