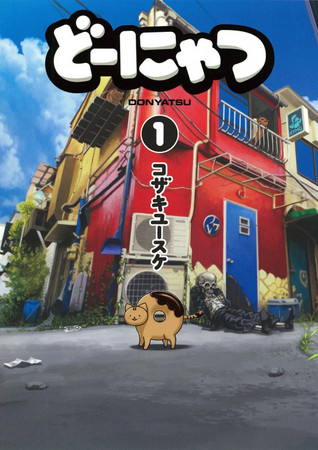 What in heaven’s name did I just read?

I saw this one being recommended for fans of Neko Atsume and decided to read it. Though I am so confused by it. This manga is about cats (and also other animals) shaped like sweets. For instance Donyatsu is a doughnut-shaped cat, then we have a bear who is shaped like a Macaron, and so it continues. Did I mention murderous mice in marshmallow-flavour?
You are asking how these animals happened to become like this? Well…. no one knows. There are no humans whatsoever, it seems like they all just disappeared (though the animals did find at least one skeleton while exploring), the cats are just trying to survive, trying to figure out what the hell happened. Since even they have no clue about it. All the stories from them all start that they just woke up in the empty world a few days ago.

As the story continues (well story…) we still have no clue what happened, but there are some hints here and there. Like for instance the tank they find, or what they find at the end of this volume (though then again, that discovery made the story just even weirder than first).
We also keep meeting new cats/animals, not all of them are that nice, and I have to say that I also don’t like Donyatsu. He is just such an idiot. 😐

The art is the other confusing thing about the manga. On the one hand you have absolutely gorgeous backgrounds, but on the other side you have cats that are just simplistically drawn. It just doesn’t match and makes for very weird art. You would see the cats standing before a very detailed shelf.

I am not entirely sure if I want to read this manga any further. It is sure nice to have a random manga, but I also wish there was more clarity on the whole situation. Maybe we will find out in the later volumes, but I am just not sure if I can wait that long.