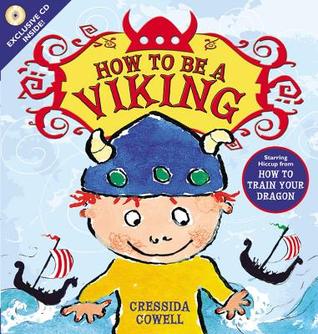 Never read the How to Train Your Dragon series, but when I saw this one in the library I just knew I had to read it. And luckily you also don’t need any knowledge of the series to read this one.

This one is about an adorable little Viking named Hiccup (I just love that name! Though I do wonder how his parents got to call him like that.), unlike all the other Vikings he is pretty much afraid of everything and prefers to do calm and polite things (yes, totally not what the Vikings are about in this book). He has to go on his first sea voyage (so imagine his fears and his worries), and I just felt sorry for the little guy. Though later, on the voyage, I started to cheer for him, because he was so brave and awesome (unlike the other, older, Vikings). I had a big laugh on what the Vikings had, I mean, come on guys, you practically live on boats, how can you get that?

The art is really interesting, not entirely a style I like, but it fitted with the book and the story.