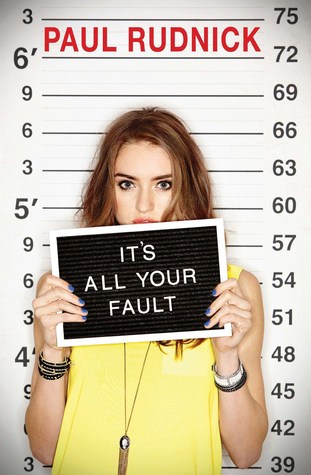 This was an amazing book. Religion, jail, a weekend with fun and revelations, dares, and much much more. You will laugh your butt off.

Say hello to Caitlin, our super-religious + sheltered girl. Say hello to her cousin Heller, who is a Hollywood star + just out of rehab. Heller has a weekend full of movie stuff to do, and Caitlin is there to keep Heller on track.
I really loved that idea, though we later find out a different view on that weekend idea. One that I liked even more than what we see at the beginning of the book.
I always like it when books take place over the course of a few days, it always feels so much longer than when books take place over a longer time. I have no clue why, or how that works, but that is how it works for me.

The weekend is full with hilarious events, but also some scary things, with dares, with helping out a girl who turns out to be totally different from what we see at first (which was hilarious btw, I never saw that switch coming, so when it came my mouth just was wide open and my eyes all round, like wait whaaaaaaattttttt). The weekend is full! And in that weekend we also learn more about Heller (Is she really this bad girl that she shows to the world? Why did she drink so much? and several other things) and we find out more about Caitlin (What happened between her and Heller back some years ago? Why does she hate Heller that much?). It was all very interesting to see both characters show us their true colours and learn about them. Even if some answers took some time to pop up.

The book switches between the time in the jail to the weekend, and I think that was really well done. Sure, it jarred me out of the story at times, but mostly I was happy to see that we were getting a clearer image each time we visited. Things started to make sense.

I do have to admit that Caitlin was a worry for me. Don’t get me wrong, I have nothing against people who are religious (I am religious as well), but I was worried that Caitlin would be TOO much. And at times she was, at times I just wanted to duct tape her mouth so she wouldn’t be able to preach and do stuff. But quite often there was this great girl who didn’t immediately dive to God and preaching. And I loved that girl.
As the story continues she does loosen up a bit and gets more relaxed. She even does a few things that she never thought she would do.

I have to say one thing though, I think it was absolute BULL that she called herself a slut and other words when she kissed a guy. HER FIRST KISS guys. She never even kissed a guy, but she found herself a slut and a floozy. WTH. I found that just ridiculous and I was wondering how her parents educated her in the sex/kissing topic, or that she was so sheltered that she apparently thinks it is bad to do something that isn’t in her normal daily life.
But come on girl. You are 17, kissing isn’t bad, especially if you do it with just one guy. We will talk again when you keep kissing different guys in a span of a week or something. 😐

I didn’t like that Ava girl, what a total insert some choice words. Bah, those kind of people just ruin it for other people. And hurt a lot of people in the process. The actors, the writers (who the hell stalks an author????), the movie crew, and many more. 😐

Heller turned out to be a great girl. At times I didn’t like her though, I found her mean and rude, but as we learned more and more, I saw a different Heller and I could also imagine why she was acting like that (still not saying it is good, but I can see why she did it).

There is also a kind of love triangle going on, but I didn’t mind it that much. It wasn’t that much around + it was mostly the guys going after one girl (which is a change of scenery for once).

I laughed my butt off during so many parts. There are just too many to mention. This book was amazing, it had well-written characters, a great story with lots of questions and answers, a great world, and much much more. This was one of my most anticipated books of the year, and it really fulfilled all my hopes and dreams I had for it.