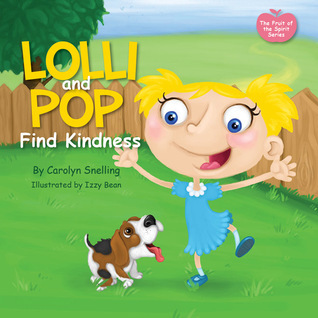 I received this book from the author in exchange of an honest review!

This was a really adorable book about a girl, a puppy, and about kindness and God. I enjoyed reading it, normally I am a bit hesitant about books that feature God/religion. Don’t get me wrong, I am a Christian myself, but often books with religion feature it in such a way that it feels like you are being pushed to that belief or get smothered in it. But not with this book. Oh no. The book is clearly a religious one, but one that doesn’t push or smother. And I am happy with that.

The main focus in the book is Lolli who receives a puppy named Pop (and thus their names are combined Lollipop, which is something that gets noticed by several other characters, and also seems to be a bit of fate that Lolli was able to receive Pop). Lolli is an adorable character, dedicated, though I had to laugh at the times that she was happy that because someone was allergic to the dog she could have it. Or pray to God that she could keep Pop even if he makes her dad sneeze. 😀 Of course, reprimanded by her mom, but I just couldn’t stop laughing, because I could see me say the same things back when I was her age.
She also so honest, and I love it when characters are honest, I hope Lolli will keep her honesty while growing up.

The book features the hopes of Lolli to keep Pop (and her growing bond with him), and also the finding of a key and what results that gives.

The main theme is kindness, as gets mentioned quite a few times, but not so much that it is annoying.

The ending was fun, and I was happy for Lolli. Of course I won’t tell you the ending, you can read this book and find it out yourself. 😉

The art is something that I had to get used to, it is a bit strange at first, but after a few pages you are used it to and don’t mind it that much. In fact, after a few pages I was quite charmed by the illustrations.

Would I recommend this book? Yes I would. It is a fun short story with nice themes and adorable characters.