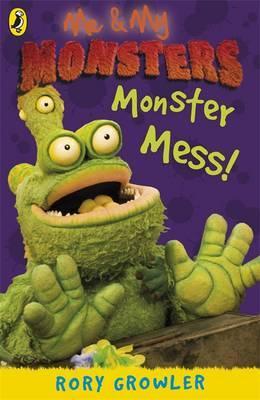 Wow, well this turned out to be very bad. 😐

I was at the library when I spotted this one, and while I didn’t like how the cover looked, the blurb and the inside of the book seemed really fun, so I decided to take it with me. Boy, I wish I hadn’t.

Quickly one finds out that this is apparently a book in a series (no mention anywhere, thanks library), and even the last book in it. So you can imagine how confused I was about the book. Monsters? Where did they come from? Why did the Carlson’s move away? Why don’t they just get rid of the monsters? And I had many more questions on the books, some got explained a bit later on, but mostly it was one confusing mess.
Normally I would drop books like that, but I was hopeful that maybe the book would turn out to be OK in the end.
Sadly, that didn’t happen.

Let me start with the monsters: Dear Lord, what a crap bunch those are. Don’t get the hint, are annoying, mean, rude, stupid, what the hell is wrong with you… do I need to go on? I think we would still be here coming Friday then, I would rather enjoy my Valentines Sunday, so that is it on the monsters qualities cough if you want to call them that cough. I seriously didn’t get why they kept the monsters. Mom clearly hates them, and their mess (Also I found it complete and utter bull that monsters HAVE to make a mess. They don’t have to do that at all. Maybe your kind of monsters, but definitely not all of them.), Eddie doesn’t particularly like them at times (What kind of friendship is this? One based on dislike when he has to care for the monsters?), Angela is constantly embarrassed by them, and the dad, well at times he was there, but generally he wasn’t doing much. So why keep them? Why not just move out, or remove them? Shouldn’t be that hard, should it now?

The book is plagued by stupidity and more stupidity. At times I really wanted to just throw with the book (though I would never do that), or just burn it (also never would do that, no matter how bad the book).

The illustrations also can’t save this book from anything. Bah!

Maybe I would have liked the series if I started at whatever book is number 1, but probably not, considering the personalities of the monsters.