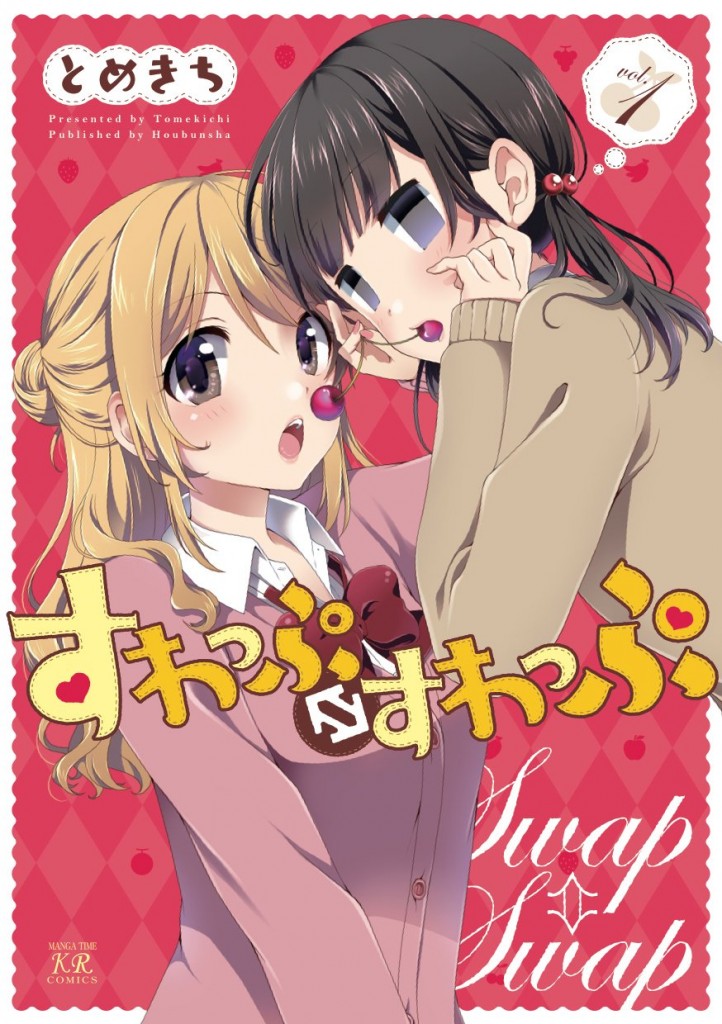 This was a nice Shoujo-ai manga with a nice magical twist to it.

Say hello to Haruko and Natsuko, two totally different girls. Natsuko is a girl who is popular, outgoing, pretty, but her grades are horrendous. The then we have Haruko who is the total opposite of her. Silent, gloomy, super smart, and a closet (well… closet) pervert. Normally these 2 wouldn’t cross paths, until the day they do and accidentally bump into each other and then kiss. What happens next is something that doesn’t happen often in these kinds of scenarios. They swap between bodies. Natsuko is now in Haruko’s body, while Haruko is in Natsuko’s bodies.

Luckily there are several ways to see who is who. Starting with the eyes (they change with them, so you would see Natsuko wandering around with dead-fish eyes), but also of course their personality. Haruko constantly groping her new body + boobs (she has none), and both of them screwing up quite a fair bit of things for each other.

The manga continues on how they slowly start to accept that they can swap, which makes for several hilarious situations as one takes over duties in the body of one, while the other goes to an event. Or when they both go shopping and swap bodies so they can check out the clothes from all angles.

And as the manga continues there are also other changes. Haruko gets closer to people and makes new friends. Haruko and Natsuko get along much much better, and instead of swapping… well they do seem to like the whole kissing aspect to it.

Later we find another couple like our 2 main leads, which brings some more hilarity to the manga (+ some needed romance).

We don’t find out why, or how, they suddenly can swap, or if it works on others as well. Which is a shame, I kept hoping for a small explanation, maybe that will be told later, the manga just got its first volume out, so here is to hoping there will be more.

I know I will keep on reading it, as I look forward to see the relationship between these 2 girls evolve in something more. Hopefully also some more romance.

The art is pretty decent. At first I didn’t get why the eyes between the girls were different (other characters have very detailed eyes, and then you would have Haruko who has dead-fish eyes), but after the swap you get it.
It is also a 4-koma format, which fits perfectly with this manga. I think that otherwise the humour would have been lost. Now the jokes, and hilarious situations really pack a punch.

I would recommend this manga. If you are looking for a funny, magical manga with shoujo-ai stuff, and don’t mind some boob groping/pervertness (only small amounts), then check this one out.