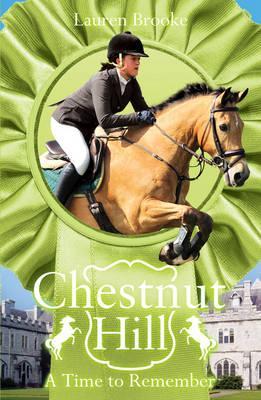 So this one came in yesterday, and while being sick sucks, it was a nice that I could immediately dig in to this one and read it.

The girl in the main spotlight is Lani! Again we got various things happening in this one. Wavering trust between friends, mean girls plotting evil stuff (really evil, but also very stupid stuff), lots of competitions, horses, some romance (yes, finally those 2 are getting the spotlight!), and some frustrations.

Let me start with that I love that we finally have a whole bunch of competitions in this book. Normally we barely have any, or maybe one, or even the lead-up to one, but no, in this one we have 2! Which I also think were kind of needed for the character development of Malory, the team captain, and her horse. Even though the POV is on Lani, there is a lot on Malory and her horse. Is Malory able to be a captain of the team? She is quite nervous, and lots of things do happen at the competition.
It also showed us that while these are best friends forever, they do have their doubts at times, and it caused a small rift to open between Malory and Lani. I am not sure whose side to pick. On the one hand, I agree with Malory, that Lani’s distrust wasn’t that nice or friendly. On the other side Lani was just worried, and it has been said many times (also in other horse books) that if the rider is nervous, a horse can feel that and it can cause him/her to do stuff that they normally don’t do. So it is a bit tricky.
In the end it was quite interesting to see what really was the cause to Malory’s horse being all off (though it felt like a copy-paste from the previous book).

I loved Lani and Sam’s time together. Those two are just adorable! I won’t spoil much, but let me just say that I loved how Lani treated Sam. Unlike everyone else (while understandable, can’t you all see that it is hurting this guy?) she doesn’t treat him like glass. Like he is breakable. She treats him like everyone else. Like a normal guy.
I felt sorry that she had to receive so much crap over it though. 😐 I just wanted to tell her that what she did was perfectly all right, and that she should just continue with it!
Also Sam was pretty clear that he wasn’t a glass statue, that he also wanted to start enjoying his life for once. That he was done with being sick, that he was now getting better and ready to live life again.

Patience and Lynsey were (no surprise here) the worst characters again. Dear Lord, I do wonder why they never get punished by anyone for what they do. They just seem to get away with it all, and I am kind of amazed with it. They also never seem to learn, instead just continue their bitchfest and their evil rumours and stuff. Even causing a lot of trouble in this one with what they did. I do hope that in the next books we will be getting to see some changes in this, and see that they are actually caught, or at least punished for stuff they do. 😐 Not sure if I will like them, even if they get some sort of redemption arc (it is a bit too late in the series for that), but at least I will be happy knowing that they got what they deserved.

All in all, this was a book full with fun things, romance, horses and much more!