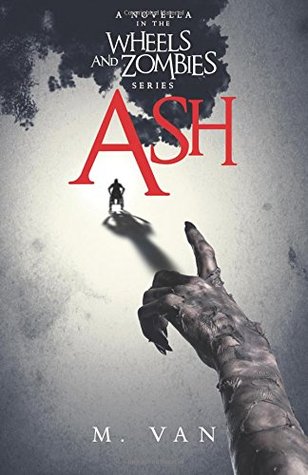 I spotted this while scrolling through my favourite genres on Goodreads, I was immediately interested in it because it had such an unique setting.

Unique I hear you say? What is so unique about yet another zombie book? Well, this one is about a girl named Ash who is in a wheelchair. Yes, this girl is stuck in a creepy zombiepocalypse and can’t move without the help of a chair. She is pretty much dependant on it, and one can imagine that this peeked my interest. Generally zombie books have character in them who are fit, or at least are able to walk, or jog at a slow pace. This girl however is not, so I was mighty curious to see how she would survive.

Since the apocalypse, the zombies, aren’t the only thing she must avoid. She has cancer, and the army would love to test on her because they think it might help with the zombie virus. You can imagine that the girl would rather not be cut open like a fish, even if she only has a few months to live.

She meets several people, people who are willing to help her (well, at least a few of them were, the others were just dicks and following orders, even if that meant delivering a young kid to a certain death sentence). I loved Angie, I loved Chuck, they were amazing characters and also so much fun. They put up with Ash (because Ash is well Ash, and she is pretty much a bitch at times) and they try to survive as best as they can.

At times I wanted to shake Ash, because of her attitude, but then I remember about her life, and that she didn’t have it easy. I won’t say why or how, read the book to find out, but I can just say that instead of feeling pissed off all the time, I felt sorry for Ash.
And she was also pretty dang brave. I mean, sure, she was afraid, but she did her best to help out, she did her best to be silent when needed, she did everything she could.

We also find out some secrets to the zombies, again no spoilers, and while it did remove the scare factor a bit, I still loved that it was added. I love that zombie books just try to think of something new or something interesting to add to the story.

The zombies/the story/the fast pace, I loved them all. I just could see myself in that hospital, seeing the outbreak happen, knowing I would have to fight to survive. It is pretty creepy, and it was awesome.

The ending however was the only part I truly didn’t like. I am not a big lover of cliffhangers. 😐

I guess I will be reading the second book because I want to know the hows and whats in that ending, and I want to see how things continue.

Would I recommend this book? Yes, I would definitely do that. It is short, but oh so much creepiness and so much interesting things happen.