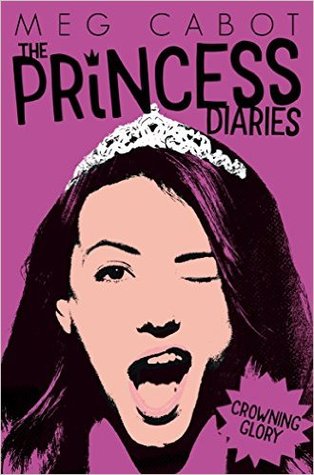 Yay! I am done with this series! It is over!

Oh no, don’t get me wrong, I did like 1 to 7 (well with the exception of 4), but I don’t know book 8 was just WTH happened (sure there was some talk about sex in the previous books, but not so much as in that one, including a few sentences over a showerhead (I will just let people fill in the blanks about that one by themselves)). Book 9 I totally skipped because it was just more infuriating Mia stuff, and book 10 (this one!) was a big struggle to get through. I even did something I normally don’t do, which is (when I was at page 158 or something like that) skipping to the last page (in this case page 363) and then read it to the end. And I can tell you, it was like one could just read without a problem. Like this was the natural process for this book. Too bad I still had to crunch through 200~ pages that were left between 158-363 so that I could complete the book.
Really I feel like this book could have done with a whole lot of pages left. As I said, from the point I was at (Mia going to meet Michael again for the first time) to the point where she meets Michael again at around 360 was just one seamless procession. Sure, it felt rushed, but I think it wouldn’t have been that bad had the book been that short. At least we wouldn’t have to struggle through 200 extra pages of Mia just worrying, being Mia again, princess stuff, some sex talk stuff, Michael OMG Michael stuff, etc..

Also while I did skip book 9, it seems I didn’t miss anything but two things.
One being the strange friendship between Lana and Mia all of the sudden. What happened? In book 8 Lana was still the same bleh, mean character, and now in book 10 they are best buddies? WHAT? WHAT WHAT?????
And it seems Mia did something to Genovia (good going girl).

While I am all for Mia x Michael (though I have to say I didn’t particularly like Michael in book 8 (see review for that one), I did feel the way everything was concluded between them to be weird and rushed.


I also will have to hide this part.


Mia’s novel. Oh.my.Gosh. Really? What was up with that, it felt that instead of a YA novel I was just reading NA at times. Not to mention it was just so badly written.

Tina was, and always will be my favourite character in the whole book. She is just so brilliant, funny, great, a good friend, and sweet.

This book was a true struggle to get through, but I did it! I am happy I finally got through it. Again, the series was good (with the occasional struggle because Mia was quite dumb at times, or overreacted, or acted more like a 5 year old. Not to mention bitchy Lilly), but the last books (8 to 10) were just not that good. 🙁 Which is a shame.

But still, I would recommend this series, just don’t read further than 6/7.
As for me, will I be reading the adult book in this series (the Royal Wedding one)? I am not sure, I do know that I probably won’t get it for my bookshelves, but instead will opt getting it from Library #3 since that one has the book (magically) in English.