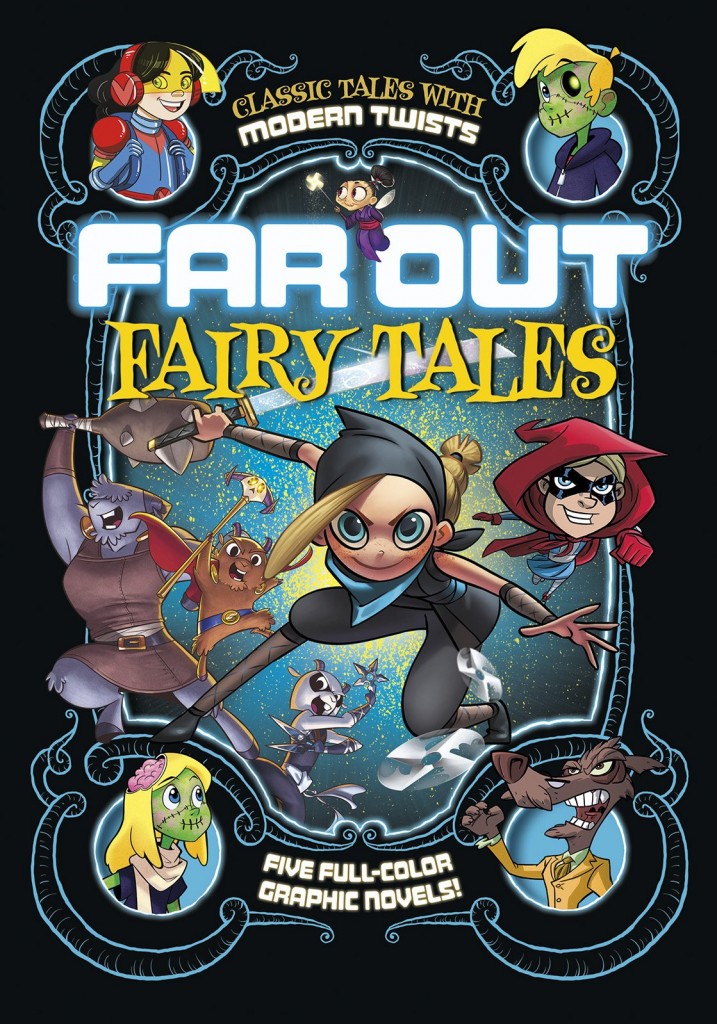 This book combines all the previously released books into one big bundle of epicness. You have 5 stories and they all are changed so that the story is completely fresh and new again! We got a Cinderella who is a ninja (epic!), Snow White doesn’t have dwarfs but instead has robots, Red is a superhero, Billy Goats is Super, and Hansel & Gretel has zombies! Now doesn’t that sound epic, awesome and thousand times of fun? It does! And I can tell you that the stories are indeed awesome.

The first one? With the ninja Cinderella, I just loved her, she was so totally kick-ass and it made the story of Cinderella into something way better. The original, the Disney and all the other versions are great, but I have to say that Ninja-rella is my favourite of all now that I know this story. The outfits, the fighting, the prince, the evil stepmother. Wow! The writers did an amazing job on this story. 5 stars for this one.

The second? Wow, wow and wow. Red Riding Hood gone awesome. Big Bad Wolf even better than in the older stories (though still as big of an idiot as always). The story follows most of the old story (and she even uses the lines we always get (about the eyes, the hands, etc.)), so I loved that. They kept a bit of the old, and mixed it with spice, awesome-sauce and coolness. I also loved that they changed the Grandma and stuck her into a great role. 5 stars for this one.

Then we have Billy Goat, I didn’t like that story one bit. It was boring and bland, maybe it also has to do that I already don’t really like the original, so I couldn’t care for a modern story. 0.5 stars.

Next up is Snow White, I can say the potential was there, but it quickly became boring and tedious. I had expected differently from the robots, and the end with the “prince” well, I just found it boring and bland. I liked how it normally goes, and I wish they would have kept that in here. All in all, potential, nice idea of Snow White in space, but it could have been better. 3 stars.

The last story is Hansel and Gretel, and I can just say that story was really fun, but I actually had hoped for more. The zombies were fun, but I had hoped for more zombie action. I still loved the witch and how she tried to capture H and G, how she tried to fool them, but of course, they aren’t easily fooled (at least not Gretel). The ending was really cute and I like it. 3.5 stars.

At the end of each story we also get 2 or more pages about the real story and about the characters and what they originally were in the original stories. I really liked that this was added, it made the book even better, and I am sure that kids will love finding out about the real stories.

The art is mixed, but that is because there is more than one illustrator doing the job. At times I liked the art, but at times I didn’t particularly like it.

Ah, and they should update their content page. As you can see from what I posted Snow White isn’t the second story but actually the 4th, Billy Gruff is the 3rd story and not the 4th, Red Riding Hood is 2nd and not the 3rd. Which was kind of confusing, as I expected certain stories, and then saw a different one.

Would I recommend this book to people? Yes. I would, it is still a fun book and I will be giving it: