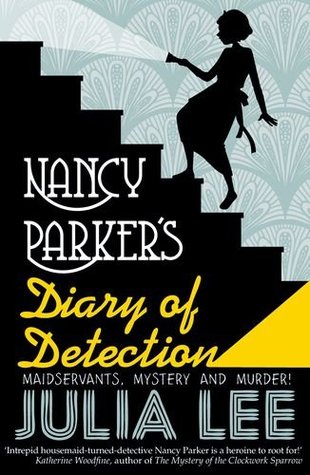 When I saw this + read the blurb I was really curious about the book. I do love some mystery books, especially when it is middle grade/YA (and has a hint of historical background).

Sadly, though the blurb made it seem like this book would be all about Nancy, Nancy and her life and her figuring out the mysteries in the house she is the maid in. However, we have 2 other characters. Ella and Quentin. I didn’t look forward to those parts at all. I warmed up to Ella a bit, and I started to like her a bit more, but it was still a big shame that apparently this book isn’t all about Nancy. sighsBlurbs. 😐 So I have to say -0.5 stars for that.

The other thing I didn’t like was Quentin. He was the most useless, worthless, annoying piece of character in the whole book and frankly the book would have been so much better if he wasn’t in it. His parts I just tended to skim/look over after a while. He didn’t add anything, he was just there, did some stuff, but that was it. BORING. No wonder his dad shipped him off for summer vacation. 😐 Seriously, he does nothing, adds nothing for most of the book, but the ending. Wow….. Another -0.5 stars.

However, there was enough good to the book. I loved the diary parts, even though, thanks to Nancy’s horrendous spelling at times (though I also found it magical that she could write some difficult words without trouble, but other, easier words, were mangled) I had some time to figure out what she meant. Only by speaking out the words did I find out what kind of word she mangled and what she meant.
But, I think that also gave the book character. It made the diary seem more real, and made the character of Nancy, who just went to school until the age of 14, and apparently didn’t really have much of lessons there, even more lovable and kind. And it also showed that even though she didn’t like school (then again I would also be bored to death if you only got a few lessons and after that it is repeating those/nothing new), she still loves learning.
Nancy’s observations were really fun to read, and I laughed quite a bit at a lot of stuff. She sure has a vivid imagination. Seeing conspiracies everywhere and any time. 😀
I also have to say that I love a character who just tries to read, even if it is 5 minutes, and even if she should actually be doing work. I know the feeling of that. Knowing you have stuff to do, but the book you are reading is sooooo exciting!

Her theories and observations were great, and some really had a ring of truth in them.

The mystery of Mrs. Bryce and GG and how these two were connected was really fun and I had a blast trying to see if I could figure anything out. Also I liked to find out more about Cook, even though I really disliked her more and more with each page I won’t spoil anything of course.

The ending was exciting and I just flew through the pages, eager to find out what would happen to Nancy and Ella.

All in all, this was a fantastic book and I really really enjoyed it a lot. I do hope we will see more of Nancy Parker, and I guess Ella too. She was in the end a great character that I liked as much as I liked Nancy.

I also loved that the book switched between diary to normal POV and then added letters and postcards to it. So much fun!