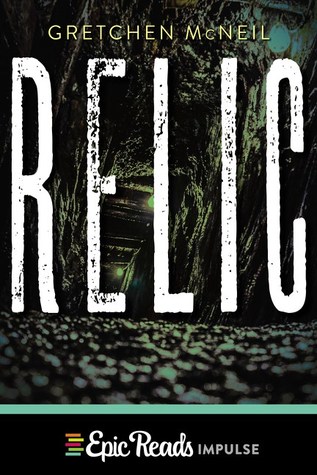 Ladies and gentlemen, Gretchen McNeil did it again. She wrote another haunting, creepy book! OK not really recommended if you are having stomach flu like me, because it is kind of gory. But other than that, read this!

I already was looking forward to this book ever since Gretchen McNeil told the world about it on Twitter. It had all the right ingredients.
1) It was written by Gretchen McNeil, and I know that she can write some amazing thriller/horror/creepy books.
2) Horror. I am always looking for a new horror book to enjoy, they aren’t always that easy to find, especially a good one.
3) Creepy factor. The sentence she posted with the tweets about her books just lured me in. It was a bit gore (though then again I don’t mind gore that much, as long as it isn’t TOO much, like you see in English horror movies these days), but it also creeped me out in a good way. It made me want to know what happened. What happened to that guy? Why did this happen to him?
4) Mystery. I just love a good mystery, and combined with horror they make an attractive pair that can work out really well if written well.

A lot of good ingredients, but then I had to wait for it to come out. And it finally did, and boy, it was a trip to remember. Sure, I might have picked a different time to read it. Because it did have gore, and I am still sick (stomach flu, yay. :|), but I just couldn’t leave it, I had to read it!

The book starts off all kind and friendly. Annie and her friends just finished High School and are looking forward to starting a new life at college. Before they do that they plan to go for a nice weekend of fun and exploring some old mines (because, heck, why the hell not?). But as the weekend comes, as evening comes, stuff starts to happen. Creepy stuff, and it only gets worse from there on. Really, after that there is not a moment were you will be able to breath. You will just be pulled inside this book, and it won’t spit you out until the last shocking reveal near the end!

Annie was a terrific character, though she displayed quite a bit of the good old horror stupidity trope. Oh hey, we had a scary experience, let’s not talk about it with anyone all right? Oh people are trying to protect us. Eh, screw that and let us kids handle the stuff.
But I also really liked her. I could imagine her jealousy, though I think she might have taken it a nudge too far at times. Sure, Frankie was annoying, and yes I hated her guts (more on her later), but I feel that what she did was just forming a rift between her and her boyfriend Jack.
And I liked how smart she was, and how hard she tried to work stuff out, because she wanted to help, because she wanted to break whatever was haunting her and her friends.

Jack was also an amazing, sweet character, and I felt sorry for him. Sorry that he had to endure discrimination because of his colour/origins. 😐 I loved how sweet he was with Annie, and even when she displayed severe cases of jealousy he stuck with her. Tried to comfort her.

I had 2 characters I didn’t like. One was Annie’s dad, and how he acted, and what he did. I won’t say much more, just read the book.
And the other was Frankie. Dear Lord, girl. Get the hint, and move away from the guy. I was just so frustrated with her attitude and behaviour, and I have to be honest, I was kind of hoping she would be the first to well, um, die. 😐 I know this sounds mean, but this girl just aggravated me throughout the whole book with her flirting with a guy who has a girlfriend. That is just not done.

The book also reminded me a bit of a manga series named Higurashi no Naku Koro ni.. Just a bit reverse. You have the dam, the flooding, the one couple, the couple dies. The same happens in Higurashi. And it is always followed by lots of gruesome deaths, also during the summer.

The whodunnit, or what the creepy monster was that was doing all the murders… well, I had a lot of suspects, but in the end I just settled for one person (of course, I won’t mention names) and I was cheering when I had it right at the end. 😀

The ending was just epic and brilliant and had me squeeing. Of course, also being creeped out.

I could tell more, but I want to keep it mostly basic, as I want people to find out about all the mystery, all the gruesome facts themselves! Read this one!