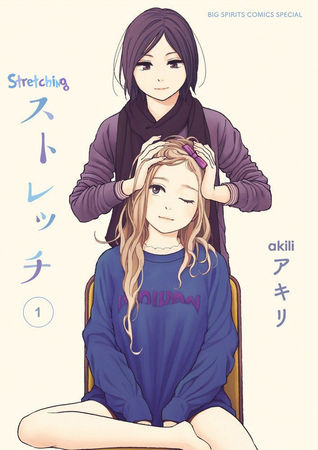 I stumbled upon this one while seeking more manga to read. I was a bit wary about it, but it also sounded very cute, so I decided to check it out. And I am glad I did!

I have seen a few anime about exercises/stretching (some more focussed on the ecchi part of the exercise (aka bending over and seeing a girl’s boobs (since it is never an animated guy doing the exercises), but never seen a manga that had the same theme of exercising and showing the reader/viewer how to do the exercises and what they are about.

But that is not all what this manga is about (unlike most of the exercise anime). It is also about 2 girls who are roommates (and to my feeling, much more though they are both denying it, there is just a tension there. So I am going to ship them. :D), we see them go through daily life. One girl trying to become a doctor (and working at a night job at a bar), the other, well I am not sure. We see her mostly lazing around at home, at times typing on a pc.
Both of them like to tease the other, though mostly it is the younger girl who likes to do stuff, only to get punished by the older girl (in various, often hilarious, ways).

The exercises/stretches are done while they are talking, often telling the benefits of said stretch exercise, but often it is also shown that the girls are having difficulties doing the exercises (or that they don’t want to give up, and you just snort because of their determined (but oh so painful) faces).

The manga has 4 volumes in total, and I am going to read them all! I learn some great new exercises + it has a fun story and interesting characters. What more could I want?

Ah yes, art. Well I have to say that was pretty great. I especially love the facial expressions and also the eyes.

Would I recommend this one? Oh yes I would! It is just so much fun to see these characters, and also see them grow closer (and fitter). 😀