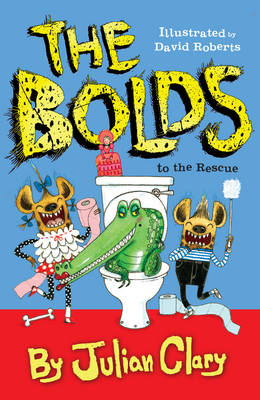 Woot, The Bolds are back again! And this time they bring a lot of new friends with them.

I read the first Bolds book last year, and was delighted to find out there would be more books about this extra-ordinary family of 4. This book was once again filled to the brim with bad jokes (though still hilarious, especially when one tells them to the boyfriend and he just shakes his head, and then groans when he finds out the answer to the riddles/jokes), animals that want to become human or at least, act human, and a daring rescue/escape once again!

This time we know who The Bolds are, and we continue pretty much were we left off the previous time. With new friends and new family members. But, in this book we are getting a whole slew of new characters. From a crocodile who doesn’t want to be stuck in the sewers, to a dog with a big attitude and a fantastic voice, to seagulls who just want to be around, and there are a ton of other critters in the house. At times I wondered when too much would be too much, as the house was really bursting out of its seams with activity and also with animals trying to be more human (and you can imagine that a lot of animals in a house, who cannot act like humans yet… well it stinks… and is messy… and chaotic…). But it was also fun. To see The Bolds learn the animals the way of the humans, to teach them about manners, food, clothes and also help them with a job (because they do need that one).

I also (as I said) loved the jokes. I am delighted that there were so many of them. In the previous book they were there, but not so much. Here and there, but in this book? You will be rolling and groaning almost every other page. 😀 Mr. Bold sure found his life/love job that he won’t lose forever considering he is so darn good at the whole joke making.

I do have to say that I didn’t like this book as much as I did love the previous one. There was a simple reason for that, the horses. The horses were just excruciating annoying, frustrating, and stupid. They wanted to be saved, they wanted to hide, but all they did was stupid actions that endangered not only them, but also all the others. And not only that, they just acted annoying. If only they weren’t added to the story, but then I guess we wouldn’t have a daring escape/revenge/rescue plan to end the book with an epic finale.

The book flew by, before I knew it the book was over and I was left feeling happy, but also hungry for more. So I do hope that this won’t be the end for The Bolds, but that we will see more of them.

The ending was fantastic, even though I hated the horses, I was happy for them. And I was also delighted to see what happened to all the other animals and what became of them.

The illustrations are still fun, and I love how the look, they fit perfectly! I love how the characters are drawn, just the way I would imagine them.

All in all this was a terrific, fun, hilarious, roll on the floor book, and you will be cheering for all the critters (well with the exception of the annoying horse pair).

Knock Knock.
Who is it?
Doris.
Doris who?
Doris is locked that is why I knocked