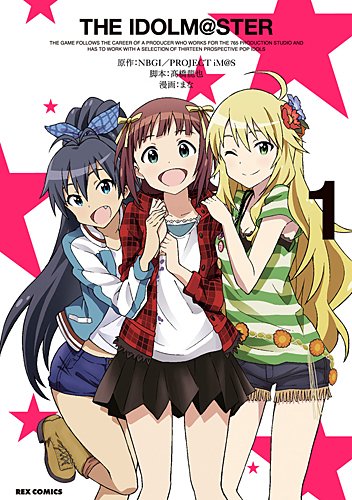 I loved THE IDOLM@STER anime (and also Xenoglossia and Puchimas) and I also love the franchise a lot, so I decided to check out the manga and see if it was just as good.

And it was! So far, from what I could see at first glance (before I read the manga), each manga volume will be about 3 idols (though the third idol will have their 2 chapters split between 2 volumes).

The first volume is about Haruka, Miki and Hibiki. Haruka and Hibiki are characters I really like, Miki is nice, but she is also just so annoying at times. Especially with how she clings to the producer and calls him darling, and does all kinds of suggestive stuff (sorry, but girl you are 14, he is in his twenties, it is just a bit creepy).

Haruka is just awesome, one can relate to her a lot. She has normal problems, she is worried about her performance and doing new things. But she also shows bravery and spunk. She is really interesting, and you just want to root for her. Tell her she is awesome and that she can do it!
Her 2 chapters were my favourite out of the book.
I wouldn’t mind more Haruka chapters, but I guess with the way the manga is done we will only see her in the background (though still as an important character).

Hibiki is my second favourite in this manga. Hibiki is so alive, and I love how she treats animals, and how she cares for them (and in Puchimas it was fun to see her summon various critters, or have critters come to her when she was in need).

The manga is all about them performing, growing as idols and much much more. It is also fun that this one takes place AFTER they have become popular, and not the whole process that comes before that (which is also fun, but is what most idol stuff is already about).

The art is really great, and it fits the series and the characters perfectly.

All in all, this was a great volume and I will be checking out the other volumes and see what will happen to the other characters.