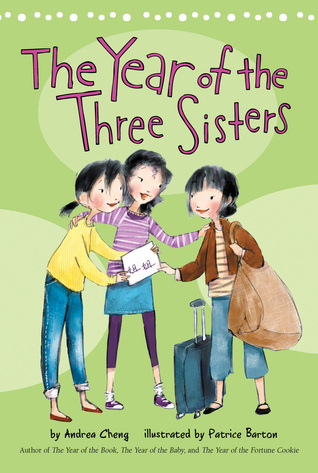 Sadly, this wasn’t the best book in this series. I adored the other 3 books, got them all as 5 stars, but I just couldn’t like this one.

I was so looking forward to this book, I have been waiting for a year for this one to come out in paperback. Fan coming to America for an exchange program, Andee, Camille and Anna being friends and them helping out Fan.

Sadly it turned into some kind of drama-filled book in which I hated Andee, I hated Fan, Camille wasn’t there mostly (sad), Anna was so-so.

Andee was just a push-over, annoying and never caring to really think things through. OH, hey you have a friend in China, lets bring her to America for an exchange plan. Lets not discuss it that much and just do it! Go go….
I also didn’t like how she treated Fan. First she is doing all that effort to get her in her house, in America, and then when it turns out to be a disappointment she acts like shit towards Fan, and towards Anna. Bah.

Fan was just annoying. Yes, blabla homesick, blaba studying, blabla continue with the moaning. Don’t get me wrong, I know that this is probably a culture difference, but I found Fan ungrateful. Studying is important, but making friends, finding new experiences is also very important. Instead she alienated herself from everyone, complained about everything and anything, and was just a pain in the ass.
She has the FUCKING change to just do something different, to taste a different culture and instead she just sticks to studying and dismissing anyone and everyone who tries to help her out. BAH. 😐

Anna was so-so. I got a bit tired of her moping about stuff. Yes, your friends are all at different schools? And? Instead of her getting better, instead of her TRYING to find some friends, she just gloomed around and only talked to one person. 😐 Wooooowww, good job girl.
Also I felt at times that her English lacked, especially in the letters she wrote to people. The sentences just seemed weirdly formatted.
I didn’t like her attitude towards her new classes. Normally Anna is really great with school, model student, but the stuff I saw passing by in this book made me see a whole different side to Anna. “Hey I don’t like that teacher, oh well, I already read the book, who cares.” This is not how it works girl.

Also the way time just went by felt weird and jarring. Months just flew by while in fact it felt like it was just days or weeks. It just hurt my head. Suddenly they would mention Fan has been around for x months, and I was like: WHAT? When did that happen? flips through book, spots nothing weird or anything that mentions a time, sighs

All in all, I had a huge headache at the end of the book. 🙁 Such a shame, this is a series that I really love, really adore, but this was just a disappointment.

And of course the ending was so typical. 🙁

A small list of stuff that I still liked: learning about China/Chinese language, the art.