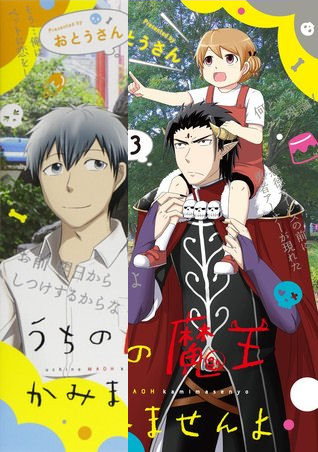 This manga just keeps getting funnier and more interesting. Satan is a fantastic character (though his name sounds evil, and he is also a demon king, he is actually quite shy and loves food), and it just so much fun to keep learning about his interests and to see him grow. Though it is still quite a shock to see such an evil demon king being so shy, so cute, and so silly. In one of the chapters we do see another side to Satan, but sadly that was just due to a curse. 😀

In these 2 volumes we learn more about Yuuhei, his family, about Satan, and we also meet various new characters (like a girl who lives in a plant (and boy that story was hilarious, I can imagine why she wouldn’t want to come out of hiding), Leviathan (and his owner, I also loved that story, especially considering what happened near the end. You flip off because of that? LOL)), we also see some past stuff happening (like how Louis and Yuuhei/Satan met and how Bifore got her obsession with Satan). We also meet the elusive Otou-san! Yes, even the dad makes an appearance, I wonder what the heck his job entails that he stays away for so long.

My favourite chapters would be: My Demon King Gets Vaccinated (poor Doctor, poor Satan), My Demon King is Santa (poor kids, but that ending was just adorable, I knew Satan had a soft spot and he shows it here), My Demon King Visits the Zoo (serious animals everywhere!).

Also I was talking in the Vol.1 review about that Satan doesn’t seem to get fat, even though he eats a small family of food. But we find out something in one of the chapters that changes that view. I was glad it was added, I wondered about it quite a bit. Poor Satan though. Luckily both Yuuhei and Satan are pretty smart. 😀

The art is still great and I really love it.

I would highly recommend this series, and as for me, I will be waiting for the next volume to come out.