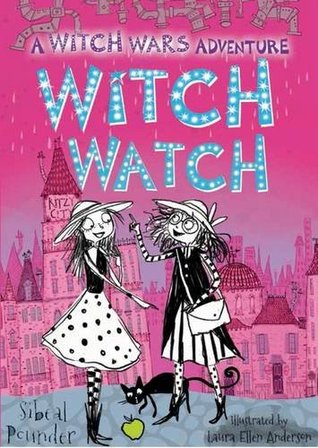 The next book in the series and I immediately devoured it when it arrived yesterday. It was just so good, so funny, so brilliant, I couldn’t stop reading. And then came the end, and I saw there will be another book (curious what it is about considering all we already have gotten this book). At the moment I am feeling a bit book hangover, the book was just so great, and it flew by too fast. 🙂

Last book we left with Tiga finding out about her mom, about who her mom really is, and this book continues on that. We find out more and more, and also fun, we also find out about Tiga’s slug (I was so curious why a girl would keep a slug, because, ewww). There are also reappearances of old characters (Ms. Heks (whose name is still brilliant considering Heks means Witch in Dutch, so I still snicker when I see the name, and my boyfriend, when he found out yesterday, also had a laugh). We also have reappearances of various characters from the earlier books. We also meet with the evil witch of all. Celia Crayfish is in town, and boy she is just wicked. She was properly evil, I didn’t like her at all. Grumpy old hag. 😐 But again, I didn’t mind that I didn’t like her, after all we are supposed to not like her. She is evil!

I also loved that the colour was seeping back into the country. It was just so much fun to read about the various colours people and buildings had. And what a surprise it was to all the characters. That character? She has pink eyebrows? That house is Watermelon green?
I am delighted for the characters that they finally have some colour, sure it means that evil has returned, but on the upside Colours! Colours everywhere!

We also finally see Silver City, and my did I love that city, though of course it is terribly sad that everything was empty and deserted.
All those hats, it is like a hat factory just exploded! The mystery behind the hats (did they get left behind by their owners? Or is it something more sinister?), was delightful, I had fun trying to figure it out, and seeing the characters find it out themselves as well.
Of course I won’t tell you what the hats are, left behind or something else, you will just have to read this book!

I was a bit amazed that the characters didn’t get who Norma was. I mean come on, there were so many hints to it, and yet no one knew until the end (OK, with exception of one character, but the main character and the other good guys just didn’t find out). Wow.

Fran was (as always) annoying and frustrating. I get that she is probably written like that, but still I would love to see a lite-Fran instead of hyped-on-sugar-and-God-knows-what-else-Fran.

The ending was really cute and I was just feeling all teary. Aww. Perfection!

Like I said with all my other reviews about this series. I still don’t believe the ages. These characters are supposed to be 9???? Again, I think they are rather a lot older. I even asked other people about it, and they all thought the characters were (based on the illustrations) 15 to 20 years old. And were shocked and amazed when I said these were characters age 9/10 years old.
It is not the first time I have had a book/series were the characters were stated one age, but felt or looked (if illustrations were added) older.

The illustrations were pretty though, I just love how the characters are drawn.

All in all, I really enjoyed this book and I will be sure to pre-order the next book when I spot it on Amazon!