I spotted this book and what else could I do but read it and see what it was about. 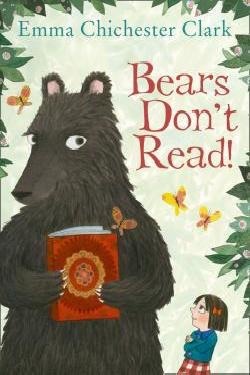 This book is about a bear who doesn’t like his bear life that much. He wants adventures, he wants new stories, he wants the world, but yeah, he is still a bear (poor thing). Until the day he finds a book and sets off to find the owner.
I just loved that premise, I was so curious to see what the bear would do. Would he find the owner? Would he be able to enjoy the mysterious words he can’t read? Will he find adventures?

It was fun to see him just wander into the city like that, and of course being surprised at the ensuing chaos around him. I thought the police was just a bit too much though. I mean seriously, this bear, who apparently can speak human language, is telling you about this book, is very polite, kind and friendly, and you just threaten him and treat him like dirt. That poor bear. All he wanted was to find the owner, to learn to read.
Luckily something happens, and after that it was all fun again. Of course I won’t say anything, but I just adored the ending, I was so happy for the bear (and for the girl as well).

I was a bit surprised by the fact that he apparently could speak, well, at least human words. Don’t get me wrong, it was a bit weird, I didn’t expect it at all. In the end it did fit, and it made the bear an even greater character, but I do wonder how the bear learned human language. From stalking people visiting the forest? Or is it like in The Bolds (a book about animals who pose as humans).

The art was really nice and I loved the way stuff was drawn. I also like the way colours were used, it was all really foresty and earthy. Perfect for the book.

Would I recommend this book? Yes! It has a lot of fun elements, and nice art.