Instead of what one would expect, this book starts off with a brand new character and we don’t see Ash until much much later in the book. 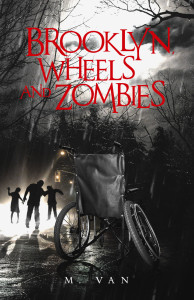 At first I was disappointed, because Ash was a pretty great character (even though she could do with a personality change), but then we find out more about Margje, or Mags. And boy, I just liked her so much. Like me she is from the Netherlands, and finding a protagonist in an English book who is Dutch is just so much fun! I could relate to her a lot. With how she lost the ability to speak English right when she was in a panic, how she at times couldn’t find the right English words, how she talked about our country, how she was amazed at the food stuff from the US, and much more! She was just so much fun, and I was nodding along with stuff she said. I can imagine she called herself Mags because no one there could pronounce the name Margje. 😀
Next to relatable she was also pretty kick-ass and wasn’t afraid to do stuff. Sure, she was still a bit scared of zombies, but that changed as the story progressed (and for good reasons as well).

She and Ash (we meet Ash later in the story) were just bound to be best friends, I just loved how Mags countered Ash’s comments about her, and how Ash countered Mags comments. They made a great pair of friends and it was just so much fun seeing them talk to each other, and how close they got. They took care of each other, though Mags especially took care of Ash, probably also because of Ash’s age. I just loved these 2 together, and I hope we will see more of this sweet friendship in the next book(s). Considering what happened near the end, I am also sure they grew even closer together than ever before.

I also loved that the book started off with action immediately. As soon as that event happens, you just know that stuff is about to get hairy and scary very fast.

I didn’t like the military (but then again that is nothing new as I also didn’t them and there actions in the previous book). Though of course Mars has a special place in my heart. He is just the sweetest and cutest, and I really hope we will see more of him in the next book. crosses fingers and hopes

That doctor and what happened at the lab, that was just disturbing and creepy, and I can’t understand how people just let him do all that stuff. 😐 Those parts at the lab were my least favourite (it was just too much and disturbing). I much more prefer the daily life, survival stuff that happened throughout most of the book. Though then again, I also didn’t like that one always, but that was mostly because of the almost getting raped parts.

We also learn more about the zombie virus/apocalypse, and boy did that give me goosebumps.

Mm, what more to say about this book, ah yes, I loved the ending. I just can’t wait for the next book to pop up and see what the girls will be doing in that one. Of course I am also curious about how the zombie stuff will go on and what will happen to various bad guys.

All in all I would recommend this book to everyone.