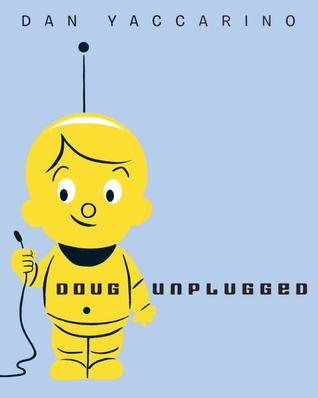 A cute little story about a little robot who finds out there is more to life than just learning through downloading.

Doug is a little boy, his parents love him very much and want him to be the smartest kid ever. So every day he has to download new stuff and not do much else. As you can imagine that is quite boring, and that is what Doug also finds out when there is a pigeon on his windowsill. Suddenly a whole world is open for him, a world in which he can learn things, but also have fun. He always thought that he just had to learn through downloading, but thanks to his amazing day in the city… he finds out there are other ways. And it is also a revelation point for his parents. 😀

The day in the city was brilliant, I just loved how amazed Doug was at everything, and how eagerly he absorbed everything. It was so much fun when he found a friend who wanted to play with him, and learn him the ways of playing (since Doug didn’t know those). I was just so happy for Doug, instead of having to spend his days getting stuff downloaded into him while his parents weren’t around he could play with his friends, he could have fun. He really deserved that.
I can just imagine how the story would continue, maybe Doug can go to school? It seems that him being a robot is no problem to the outside world, so I don’t see why not, and then he can make many more friends.

The art is pretty good, I just love the way the colours were used. It was a really fun and playful way and it made the book a feast for the eyes and also just pulled your eyes to the book.

All in all, this is one book I would recommend, it is a lot of fun, it shows that learning can also be fun, and so much more.