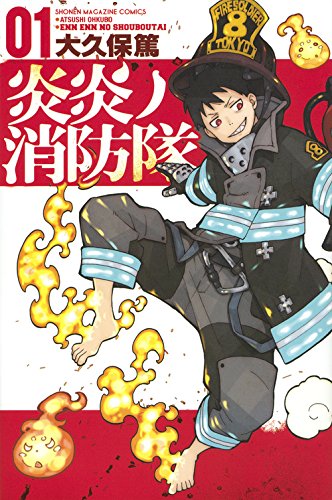 OMG this was just sooooooo awesome! Excuse my fangirling, but OMG OMG!

Soul Eater has ended, Soul Eater NOT has ended, but Atsushi Ohkubo just keeps on writing and making epic manga. This one is his newest, En En no Shōbōtai, and it was just such a delight. Instead of scythes, schools, and gaining souls, it is a Fire Brigade (a very special one with mostly people with abilities), humans are just bursting into flames, and then there is our main character who has a past that he wants to figure out. And that is not all, there is a whole ton of other things happening, and wow.

I just flew through this first volume. It grabbed from page 1, and didn’t let me go until the end. We got a whole cast of fantastic characters (though I am not so sure about that Knight guy). Then we have the whole putting the soul of a Flame person to rest (which is done epically and (of course) in great detail). There was just so much going on. It is like being on a rollercoaster, which is on fire, while you are also laughing your butt off because of the main character and his attitude (and that smirk, dear Lord that smirk. Which he gets when he gets anxious/stressed, so that means you would see him drop off a building and just smirk like a freaking demon).

The worldbuilding is also great, I am really curious about this world, so far it seems like an interesting, but scary (because suddenly bursting into flames is just not cool) world, and I can’t wait to explore it further in the next volumes.

The art, wow, I knew Atsushi Ohkubo was epic with art (Soul Eater/Soul Eater Not had great detailed stuff), but it seems that he can become even better. The characters, the backgrounds everything is highly detailed, and gorgeously drawn.

I would truly, and highly recommend this manga to everyone! I am hoping that Yen Press (since they have the rights to SE and SEN) will pick this one up, I would pick it up in a heartbeat.