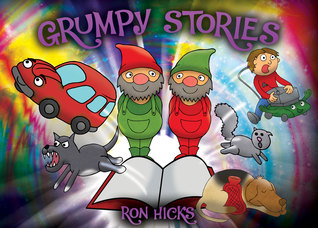 This book was pretty fun, but I didn’t like all the stories. Those were mostly the stories near the end. The mower stories were weird and not entirely to my taste, in the end I did like it a bit, but not enough. The other one was the copycat story. Sure, afterwards when I was done with the story, I found it pretty decent, but the beginning/middle parts just weirded me out.

My favourite stories would be about the puppy (though such a shame that it ended with a question only to find out that there were no other puppy stories, I was really looking forward to that one having more stories. :(), and the stories about the shedlings.

Quite a lot of the stories had a message at the end, or had a nice little ending that was really fun to read.

The stories are all really short 2 to 4 pages, even with this short format the stories all were perfectly told. They had a beginning, a middle, and an end, it never felt like something was missing, which is a talent. I have seen many short stories that fell flat because they were just too short to tell the story correctly (hopefully this is all clear).

There is also art, and it was pretty decent. I am not entirely a big fan of the style, but it still fitted the stories.

I do wonder why the book is called Grumpy Stories, when there is barely anything grumpy about it. Unless there is another meaning of the word that I don’t know.

All in all, this was a pretty fun book and I really had fun reading most of the stories.

Thanks to the publisher for giving me a chance to read this book. 🙂