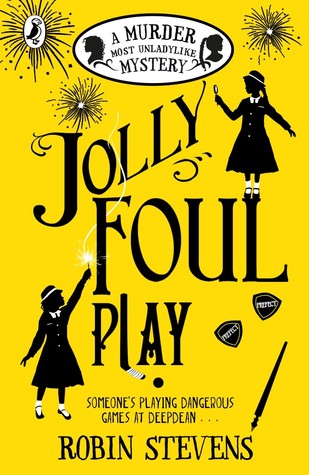 The girls are back, and this time we have a whole book about their boarding school: Deep Dean, again! I was delighted that we were back, don’t get me wrong, I loved all the other books, but there is just something special about boarding school + mystery (+ murder).

Yes murder! Deep Dean has yet another murder, this time not a teacher, or a caretaker, this time it is a student. Who could have done it? One of her five friends (cohorts)? And who is telling all the secrets that Elizabeth kept?
It was all terribly exciting, and I had so much fun detecting next to Hazel (and also at times: Daisy). Trying to find out who did what and what had happened. Some stuff was quite easy to figure out (like the rake, the secret spreader, and some others), but some stuff was well hidden. Maybe if I re-read this book one day I will see the other hints to the stuff that I might have missed.

It also didn’t make it easier that any of the 5 friends could have done it. They all had secrets, they all had something to protect. Now it was the question who was the one who had the most valuable secret.

The murder wasn’t the only thing that was discussed and a big point though. We also have a shift between Daisy and Hazel. Hazel who has no clue, and Daisy being Daisy again (in other words insufferable, bossy, mean). And yes, I can imagine that Daisy might not be happy, but I felt that Daisy was a bit too selfish at times. Instead of just talking it over, instead of doing anything, she just got angry at Hazel, it took so long before something happened that made me love Daisy again.

Yes, Daisy was never truly my favourite character, but in this one I just wanted to stuff her full of bun break cookies until she popped. I have to say, and this may sound mean, but she sounded like Elizabeth at times. Maybe a little less mean, less inclined to abuse secrets, but still just as bossy, demanding, and seeing the world only through her eyes, thinking the world revolved around only herself.

Hazel is my favourite character, followed by Beanie. Hazel is just such a sweet, great girl. Who tries her best to do good at school, to ignore the mean words people often tell her because of her heritage. I also love how she likes bun breaks and eating food. And how she still does things even when they frighten her. Like climbing on top of the roof of the Deep Dean building. She did all that, and not many will do the same.
I also love how her brain works, how smart she is.

Beanie is just so much funny, and I love how energetic this girl is. Just like Hazel she is also brave, and will protect her friends (which was a totally great part). I hope to see more of her in the next books.

Another character I just couldn’t stand was Binny. What a horrendous, shallow, bleh girl that is. 😐

But other than that this book is stuffed to the brim with mystery, friendship, murder, secrets, and much much more, and I enjoyed it just so much.

One last thing, we already had a share of history being featured in this book, and this time we had the Nazi Germany part. It is 1933, Hitler is in charge and planning all sorts of things which in the end will lead to WWII. It was really interesting to see that interwoven with the characters (and one character especially).

All in all, this was one fun book to read, and I would highly recommend it to everyone looking for a great mystery (be sure to read the other books first though, otherwise you will miss certain things).