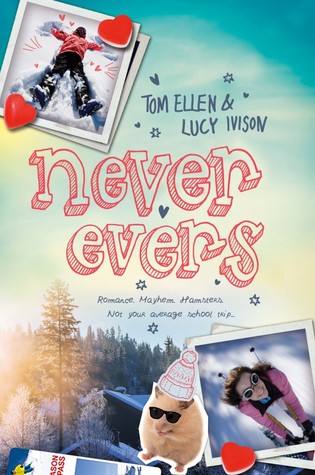 Hamsters, trips, skiing, popstars, romance, awkward and hilarious situations! This book was just so much fun and I laughed so many times.

I read these 2 authors first book (Lobsters) last year and while it did have some bumps in the road, it was a good book, and so I just had to check out this book to see if the duo made yet another laugh-out-loud book. And they did! This one was even better than Lobsters. It still had some things that I didn’t entirely like, but those faded away in the background of the book.

Like Lobsters this book is once again split up in two POVs, and like with the other book I am happy they choose this kind of POV. This way we can see what both the characters are thinking, and also see their stupid mistakes (well, mostly Jack’s stupid mistakes). Both characters had their good and bad sides.

Mouse, our dancer, who just got kicked out of balletschool and is back at normal school, is an interesting character, who is sweet, nice, friendly, and who made me laugh so hard so many times.
I loved her with Keira and Connie, they made quite a nice group of friends and she fitted in with them perfectly. She didn’t have to pretend, she just could be herself, and that way I could see a whole fun character.
I also loved her dance background.
But she also had a side I didn’t like. Yes, I can imagine why she did the things she did, the lying, but I wish she would have been honest from the start. Yes, it might be hard to face reality, but isn’t it better to be honest to people? They will find out sooner or later, and it won’t be so much fun if they do. The mean girls are already on your case, do you really need them to be more on your case? 😐

Jack, an interesting, but also clueless guy who apparently doesn’t get why a girl who get mad at him. But a guy who also isn’t afraid to pursue a girl if he really likes her. I didn’t particularly like his group of friends. One was just too mousey and silent and disappeared in the background and I totally forgot about him, the other was obnoxious and selfish.
Luckily, he was the one who generally had his head on right.
Sadly, just like Mouse, he had a side I didn’t like. Since it will be a spoiler I will post it under spoiler tags.


Then we also have Roland, our hot popstar boy, who had a really nice side to him, and I really loved all the parts which featured him.

I also loved the hamster, it just gave the book something extra. Plus I just adore hamsters!

There are also the typical mean girls (it seems you barely can have a book about schools without them). I just wanted to put a snowball into those girls’ clothes. 😐

This book just flies by and believe me you will laugh your butt off a lot of times. I would definitely recommend this one.