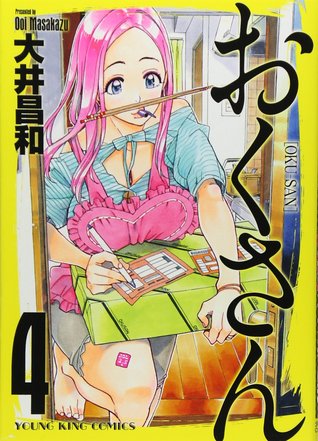 At first I wasn’t sure if I would do a review, but after a bit of thinking I decided to just do it, there was just a review floating in my head that wanted to get out.

This manga is a bit ecchi, quite a bit weird, but also super hilarious. It is all about Okusan, a housewife who just moved with her husband in a new apartment. Now I can hear you think that that doesn’t sound very exciting. Well, believe me, this book is more than exciting. Not only because of Okusan’s huge boobs (like really huge and practically unnatural) getting stuck or flopping out (yeah, don’t ask), but also because she is a huge airhead and her decisions, and stuff she does, are just hilarious to see. But she is also sweet, kind, and likes to take care of people (not only her husband, but also others).
At first you mostly see her alone at home, or outside doing stuff. But later on she makes friends and you will see them pop up as they go for a coffee, or go fitness (they all met at the fitness club), or other things.

You see her navigate through the life of a housewife, you see her figure out where everything is in this new neighbourhood. In just 4 volumes I have seen a lot of growth in her, sure she remains ditzy, but she is having so much more fun outside the house.
And you can see she is getting her household under control (which took a bit of time).

We never clearly see the husband (or at least not his face), which is an interesting choice, and it is quite hilarious to see how the face is hidden. By a hat, by boobs, by his wife’s other parts, and so on. At times I wish we could see his head/face, I am quite curious about it.

The wife x husband scenes are adorable, cute, and well, while you don’t see everything, it is still quite ecchi. I am happy for Okusan that she has such a sweet husband. And it is quite fun how the other characters react to their happiness (often mistaking them for newlyweds).

There are just a few things I didn’t like, and the biggest one would be the littlest sibling next door. She keeps walking around naked, or barely dressed. She bothers Okusan, touches her boobs and butt and several other things. It is just a bit disturbing, and I wish it wouldn’t be in there. Sorry, I don’t need to see little kids naked, or do stuff like this. Bah.

The boob jokes also get a bit too much at times, though at other times I am just laughing so hard when our Okusan boobsmacks someone again. 😀

What more? Ah yes, I absolutely love the art, it just fits the manga perfectly, and you can also see it improve as the books come out.

All in all, this is one manga I will continue reading, and I would recommend it to everyone who doesn’t mind some ecchiness and is looking for something weird and fun to read.