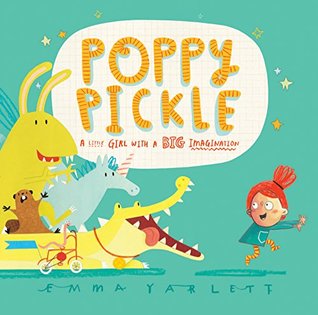 I read Emma Yarlett’s Nibbles: The Book Monster, and just adored it (hoping there will be more Nibbles someday), and decided to go on a hunt for other books by this author/illustrator. Thus I tumbled upon this one.

This was such a delightful, imaginative, sweet, colourful, fun, wonderful, cute, hilarious book, it brought a big smile on my face, and I also laughed quite a few times.

The book is all about Poppy. Poppy who often tends to get into a pickle because of her imagination, like throwing a cat (not something I would recommend) while imagining the cat is flying as an astronaut. Her parents aren’t that happy with those things, but when Poppy’s imagination really starts to POP up in real life…. It was so much fun to see what Poppy would imagine next. Woolly Mammoths? Check! The 3 little pigs (and a hotdog who doesn’t mind shying away from telling what he was before he became a hotdog)? Check! Everything that Poppy suddenly imagines comes out. But you can imagine what will happen next, the house is just not build for so many imaginary creatures, and also a few of them aren’t that nice to little girls.
I loved Poppy’s solution, and also what happens at the end. What a shock that must have been to the parents. 😀 But maybe they won’t just dismiss her imagination so easily.

The imaginary creatures and what Poppy imagined, oh my, they were so much fun. So many things I wouldn’t mind imagining as well. A castle of cake? A giant woolly mammoth? Trees with chocolate? Unicorns? Yes, yes and yes!

Poppy is a delightful little character and also so much fun how she never let anything get her down.

I also have to give extra points to the books/newspapers and what was written on them. Especially the last book the mom read was a delight for the eyes. Yay for that reference!

The art is lovely, Emma Yarlett has a great artstyle, one that I already fell in love with when I read Bear’s Big Bottom. The art is also delightfully colourful (perfectly fitting for this imaginary tale).

Would I recommend this book? Oh yes, yes I would! This is just so much fun. There are so many details, so many things that happen on one page. I am sure young and old will love this book.