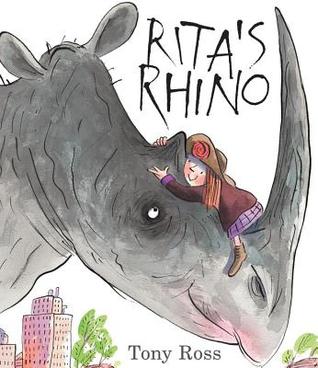 Meh, I expected much better. But I guess this is a case of what you sometimes have with sandwiches, it looks good enough to eat, it smells delicious, but when you take a bite it is bitter or too sour, or rotten.

This one reminded me of The Slightly Annoying Elephant, a book that has the same kind of premise, a kid just magically gets an elephant and no one gives a bit about it. The same is the fact in this book, a kid wants a pet, but doesn’t get the right one from her parents, and so decides to go to the zoo and take a rhino. Nobody bats an eye as she takes it in, apparently no one notices or something? Which made me wonder how stupid people are that they don’t notice this. You have an animal weighing at least a ton, but it is totally OK to keep it in your apartment? WHAT?
Or that latter part with her pretending the rhino to be a bouncy castle…..

So yeah, I am tagging this one as octarine (magic) because of the whole Oh, let me just pick up a Rhino from the zoo, and no one notices. And also because it has that feeling, but yet not that feeling. It is hard to explain, the book feels magical, but on the other hand it doesn’t.

Just like with The Slightly Annoying Elephant I was annoyed with the animal too. I found him too demanding, too annoying. He was the one who wanted to get out, who wanted to explore, instead he keeps complaining about his precious grass (which is impossible to get for normal people unless they have money), about the room, about anything and everything. Seriously, stop whining.

I also didn’t really like how the girl treated the Rhino. I don’t think having a pet would be the right thing for her. Not at all. 😐

So yeah, stupidity to the max, some sort of magical feeling, not too good characters. The only thing that I liked was the illustrations.

Would I recommend this book? Not really.