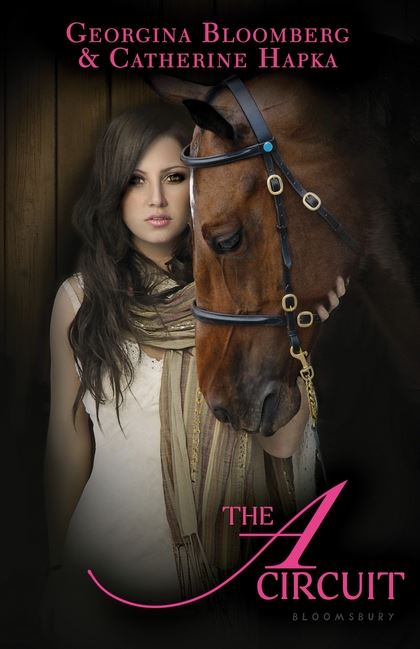 I have found another fun horse book to enjoy. This one for a bit older audiences than the other horse books I have been reading lately. But I really liked that, it seems a lot of horse books are for younger audiences, and it is just refreshing to find one that is for YA and older. 😀

This one combines horses with fame (most of the characters (OK, all of them except Kate) are rich and/or famous). We have all the other typical things added, some romance (though way more heated than normally, but then again, this is for older audiences), drama, mean girls and of course contests and lessons (because how else will these girls and boy(s) show and get ribbons).

We have 3 POVs. First up is Kate. The one girl who isn’t famous or rich, who works her butt off at the barn, and is also an amazing rider. At times she was a bit too much, I can imagine she might want to work hard, but this was just overkill. But as the story progresses you can see why she might not want to go home. Her mother has OCD and Kate often comes home when her mother is having another episode (which means a whole house overhauled and divided in 4s), her dad flees the house and is pretty grumpy, her brother is rebelling, and so her home situation is not the best. One can imagine a girl would flee from that and find a safe heaven at another place.
She is an interesting character, and I am happy with how she stuck her ground, didn’t let people just push her around, even if she didn’t have the fame or richness.
Kate was my second favourite girl.

Then we have Tommi. A rich girl who is amazing at riding her horse(s). She is really trying her best to go pro, or to do something so she can stay with horses even after High School (she is almost a senior). Her background isn’t the easiest ones as well. Her dad cares a lot about her older sister, tries to marry her off, and also practically demands that she goes into law, even if that isn’t what Tommi wants. But Tommi is a girl who doesn’t give up easily, she will fight for what she wants, and I was just cheering a lot for this girl. Sure, she had some faults, but all in all she was a very interesting character.
Tommi was definitely my favourite character.

And lastly we have Zara. She wasn’t my favourite character for most of the book. And that was mostly because her attitude. At times we see a different girl under things, but sadly, we also see a side that I hated. A side that likes partying, that doesn’t care about consequences (the stuff she did in this book weren’t only harmful to her, but also to so many others), she is selfish. And then she expects people to just understand her, or be nice to her.
She does work hard, but it comes and goes in waves. Generally I found her to be quite lazy and annoying.
I do hope she will get better as this series goes on, because I am sure she can be better, but she will need to ditch a lot of things in order to do that.

The POVs move in quite an annoying way. I don’t have a trouble with multiple POV if they are done right. However this one confused the heck out of me. I was just getting into Kate’s POV and then it would switch to Tommi or Zara. Sure, there were dividers between the parts, but I just wish the author had clearly marked whose POV we were getting.

I also didn’t like Fitz. Too much of a playboy, and he clearly can’t make the right decisions. Near the end he did make a sacrifice that slightly changed how I thought of him, but still not enough to make me like him.

The horses, the contests, the lessons, and everything else horse was so much fun and also so interesting. Again, I am normally used to books were kids are the main characters, so seeing them race in contests with other more adult riders was a delight and so much fun.

All in all I will definitely be reading more of this series since I just want to know how things continue. If they will win ribbons, how Fitz will be treated, if the girls will get closer, and several other things. And I would recommend this book to everyone looking for a more YA/adult horse book.