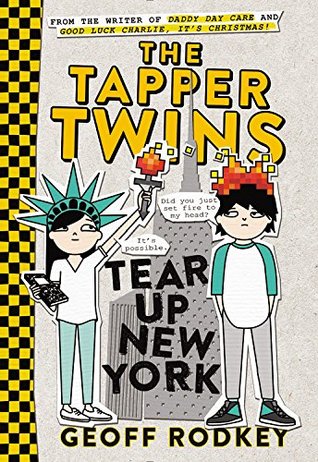 The second book in this series, and I have to say it just was terrific! The first book was pretty fun, but this one takes the cake. 😀

It is done pretty much in the same way as the previous book, with illustrations, photographs, texts, and it was script-like. I am not really used to reading a book like this, so at times I was a bit confused between characters, but after a while the whole: Claudia: (Claudia says something) > Reese: (Reese says something) > Jens: (Jens says something) wasn’t that hard to read and I got into the flow of the book.
I have to say it is pretty darn creative to write your book like this. It is just way more fun to read, and it makes it more interesting as you can just see those characters talk in front of you and tell you the story of what happened.
Also the addition of photographs, maps, texts, chats and more was just brilliant and brought the story to life even more. And as a girl who loves New York (and hopes to visit one day) it was really informative and fun, and made me love NY more + made me want to go there even more.

The story was hilarious. It is all about a scavenger hunt gone wrong. Yes, gone wrong. You are asking me how something like a scavenger hunt can go wrong? Wellllll…. that is easy. You take 4 idiots and a plushie with a deathwish, chaperoned by a dad whose head is more at work than with the kids. You take another team of horrible girls who have too much money (and a horrendous mom). Then you add some competition (Claudia and others) and frustration over the fact that those rich girls will probably win (everyone, well with exception of Reese’s team because they are just idiots), then you add some zaniness (from Reese’s team), and voilà chaos is coming. 😀
The scavenger hunt was fun, and I loved to see the kids try to get as many items as possible. We generally only see 4 teams (Reese’s and Claudia’s being the main teams, and then Fembots and Kalisha’s team), the others are just named here and there, but don’t take much of a role.

I am not sure which team of the two main was funnier. Though thinking back, I have to say I laughed the loudest during Reese’s adventures, especially with what happened to the plushie. Dear Lord, that plushie is never safe is it? And then James’ adventures. Wow…

I also laughed hard at the mom and dad stuff. The dad had it coming though. What an idiot. 😀

I didn’t like the Fembots, and all they did. I found it horrendous that they were able, and were allowed to do all the stuff they did. Bah.

The ending and what happened there? Awesome, just awesome. I won’t spoil anything, but you will be laughing your butt off, and also cheer.

All in all, I really enjoyed this book, and I would highly recommend it to everyone!