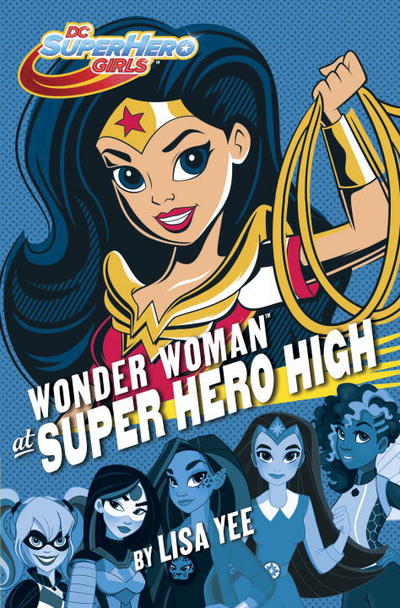 I heard about this series through Twitter and I knew I just had to check it out. And boy, I am glad I did. There were some bumps in the road that weren’t fun, but most of this book was fantastic.

This book is all about Wonder Woman who decides to leave her home island and go to Super Hero High to learn all about being a superhero. Which she already is, but she wants to learn new things, make friends, and much much more. She wants to become better. She is really driven to proof to her parents, but also her peers and teachers, that she is truly Wonder Woman.
She was a really interesting, and fun character, and I loved how she went through her school life. She really grows as the story goes on, from a girl who barely knows about life outside of Paradise Island, to a girl who is strong, has her wits with her, and who has made friends.
There were just 2 things I didn’t like about her, and that made me feel a bit frustrated. How she didn’t seem to understand the littlest things, how she took everything literal, how she just seemed so dumb. Yes, she was sheltered, but this is beyond sheltered, this was just wth how did you ever survive life so far if you can’t even grasp that!
The second thing I didn’t like was how selfish she was at times. Like with the monthly superhero thing? How she just knew it had to be her. How with the triathlon she just didn’t get the hint. And several other instances. Sure, she is also selfless and will do anything for everyone, but this just seemed odd and weird. I hope she learned a lesson about humility from her time at the school. She needs that.

I so loved all the characters in this book, the good guys, the bad guys. Harley (or Harlequin), Green Lantern, Cheetah, Beast Boy, and so so so many more. It was a delight and I just kept squealing when a new character popped up and got introduced. We also have several human or non-superhero people that are known to all. Lois Lane, Barbara Gordon for instance!
It was such a delight, and I do hope we will meet many more superheroes, and villains as this series go on.
Not only do we see the teens, but we also see adult heroes as Hippolyta, Superman.

The lessons, the school, it was all so much fun, and I would love to participate in all of them. To learn how to make uniforms, learn about superhero history, do fly tricks, solve Riddler’s riddles, dodge Harley’s camera, and much more. It all sounds awesome, though also very intense. I can imagine the kids are under pressure, and I wish that more people in this book knew that, instead of judging the characters based on what they saw on Harley’s feed.

I didn’t like how the mystery of who did the threats was handled, or actually the revelation on who did it. The mystery itself was interesting, and I was curious to find out who did it. I had a few suspects, and I set out to find out who it was.
The person who did it, well she was on my list. 😀
But how it was solved, I will put this under spoiler tags.


But all in all, this was terrific book and I can’t wait for the next books. Super Girl is up next and I am excited to learn more about that character!
If you love superheroes, if you want to know more about them, be sure to check this one out!