Hello everyone! Welcome to the Book Tour for Love Charms and Other Catastrophes!

I will first post my review, and after that I got some information about this AMAZING book. 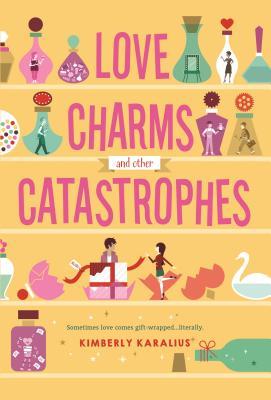 I received this book from the publisher/author/book tour host in exchange of an honest review.

We all know how the previous book ended, Zita (the great big evil) was defeated, and now there is this big gap in Grimbaud. No spoiler, the blurb also clearly tells that Zita’s tyranny is over. 😀 Zita had control over the whole Grimbaud, who dated who, who did what. And the town is recovering from that. From that tyranny.
This book continues about that, about what happens next, BUT, yes BIG BUT, we also got much much more gorgeousness and loveliness lined up for you!

Unlike the previous book, this book is 100% about my fav girl Hijiri. I just love this girl, she has her fair share of trouble from parents who are never around, and also never really care what she is saying, to her heart which feels tiny, and she worries she won’t have enough place for love in her heart. It makes her so much more real. Add to that her amazing love charm skill and how, even without charms, she is amazing with love (but also with friendship). She is able to figure out her friends, and she loves to help them out (though in one case (Nico/Martin) she only can use her awesome advice skills because Nico and Martin are still very much against charms (big DUH there given the first book and the middle short book)).
In this book she has more than just the love charm making (because now she can be free to do it without having to be afraid of Zita), Love is also meddling (again, that person (sorry, I am still not so sure about their gender/sex) and has given Hijiri a boy. A very cute, sweet, lovely boy. It is up to Hijiri to figure him out, see what makes him tick.
You can imagine that all this + several things that also happen in this book (I will talk about that in a bit) + the fortune contest, doesn’t make it easier for her. I just wanted to hug Hijiri at times, she really needed that. Thankfully, she also has her friends who are always there for her.

Ken was really an amazing addition to this series. I just LOVED him so much, he was just so sweet, adorable, and kind. I felt sorry for him that he couldn’t be honest with Hijiri (not his fault, but all Love’s fault). You could see it broke him, he loved Hijiri so much, and wanted to be with her, but she wasn’t making it easy for him, she didn’t want to see him for who he was. She just saw a charmed boy, and not the sweet, kind boy who loved her so much.

It was just adorable to see Hijiri fighting her feelings, but seeing that she just couldn’t. Slowly, very slowly, you saw her long for Ken, you saw her reach out for him, you saw her needing Ken. And when a certain event happened, his name was the first she called in the way of help.

It was just so swoony to see these two together, though I did want to shake Hijiri at times because of her attitude. Yes, girl, he might be charmed, but that doesn’t make him any less real. He still has feelings, he still is definitely liking you. Can’t you see you are hurting him?
But the times when they were together, and Hijiri wasn’t fighting so much, I was just going KYAAA! I just couldn’t wait until these 2 would truly get together.

The love charm contest was just so much fun to see, though I hated that it was a popularity contest. Hijiri should just have won, but then again, the book would probably be over way too soon then. Still I was just screaming at the people from Grimbaud for not seeing that they were voting for the wrong people!

I felt sorry for the twins, I can imagine that it must be tough for them both, knowing they have to pick something, and that they might be separated.

Then we also got an exciting event happening around the 2/3 part of the book, and I just loved that it was added, it gave some extra excitement, and it also helped several events get started. I also loved how that was solved/how that finished, it was really fun, I don’t mind some action, I loved it in the previous book, and I was kind of missing it in this one.

The ending? And all that happened there? AMAZING! SUPER AMAZING! Really, the contest, the big finale, the truth about Ken? Yes, yes and more yes! I just adored it so much. And when we finally found out about Ken? I just cried. Tears of sadness, but also tears of happiness. And then the swoon started and ahhhh. I won’t say more, you will have to find out yourself. 😀

Now I just hope that we will get another book, because with all those things that happened at the end? There is still things that can be said, then we have the Ken thing, and sorry I just don’t want this series to end!
I would highly recommend this book to everyone!

Also I love the cover, it just fits with the other covers so perfectly. I can’t wait to have this book (I have it pre-ordered) and then see how they match in real life.

Aspiring love charm maker Hijiri Kitamura was excited to come back to Grimbaud for her sophomore year-until she learns about the upcoming charm making competition. Grimbaud has just started to recover from the tyranny of Zita’s love fortunes and it would be too easy for the winning charm maker to take Zita’s place. The only solution is for Hijiri, with the support of her friends and fellow rebels, to win the contest herself.
Unfortunately, that’s easier said than done, especially when Love itself has decided to meddle in Hijiri’s life. Concerned that it’s favorite charm maker has given up on finding a boyfriend of her own, Love takes matters into its own hands and delivers the perfect boyfriend to her in a giftwrapped box…literally. 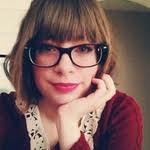 KIMBERLY KARALIUS holds an MFA in fiction from the University of South Florida, and has been sharing stories on Figment.com with a strong following of enthusiastic readers since the site’s conception. Although Kimberly lives in sunny Florida, she prefers to stay indoors and sometimes buys a scarf in the hopes of snow. She loves watching really old cartoons and silent films. Being in Florida certainly has one big perk: going to Disney World. Which she does. Frequently. Love Fortunes and Other Disasters is her debut novel.